If you could take a year off, what would you do?

Honestly I do not know. Everyone dreams about taking a year off work and travel or do something like buy a house and work on some renovations, take a few courses or perhaps work on something else that you’ve wanted to do like learn a new language, move to a different city or county or just kick back and do nothing for a refreshing change of pace. I have no idea what I would do, if I could afford it. Let’s say that I did have the money and have no fear of where my next job will be at the end of the year.

I guess I would travel or maybe learn how to play the guitar. I have always wanted to learn to play guitar and that is one of my regrets that I gave up on lessons as a child because I couldn’t stand the teacher and never looked at finding another one at the age of 12. I would love to go and learn or just pick up classes online and concentrate only on that. 2-4 hours of classes with a gap in between per day and then practise quite a bit during the rest of the day. Or will I try and pick up a language to learn like say French! Or Klingon!

Or would I just live a quiet life at home, doing what I always do with the exception of any work? I just don’t know. If I had the money I guess I might go to some places, a resort maybe, a hill station or just a small cottage somewhere. Maybe I would take the time to write a book that I have always wanted to do.

Samhain is a pagan religious festival originating from an ancient Celtic spiritual tradition. In modern times, Samhain (a Gaelic word pronounced “SAH-win”) is usually celebrated from October 31 to November 1 to welcome in the harvest and usher in “the dark half of the year.” Celebrants believe that the barriers between the physical world and the spirit world break down during Samhain, allowing more interaction between humans and denizens of the Otherworld. Ancient Celts marked Samhain as the most significant of the four quarterly fire festivals, taking place at the midpoint between the fall equinox and the winter solstice. During this time of year, hearth fires in family homes were left to burn out while the harvest was gathered.

After the harvest work was complete, celebrants joined with Druid priests to light a community fire using a wheel that would cause friction and spark flames. The wheel was considered a representation of the sun and used along with prayers. Cattle were sacrificed, and participants took a flame from the communal bonfire back to their home to relight the hearth. Early texts present Samhain as a mandatory celebration lasting three days and three nights where the community was required to show themselves to local kings or chieftains. Failure to participate was believed to result in punishment from the gods, usually illness or death. 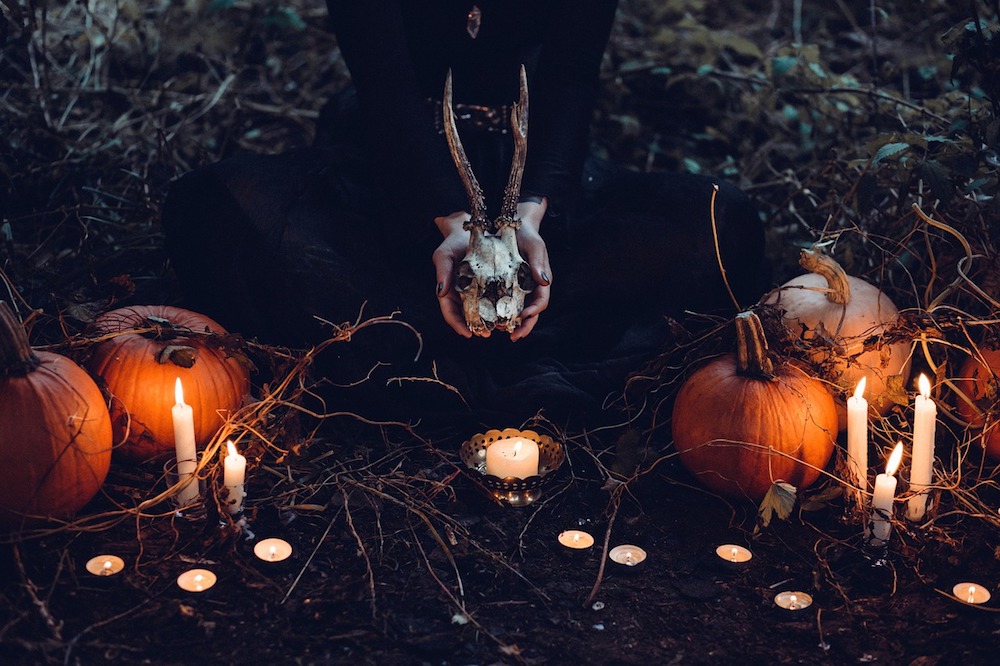 There was also a military aspect to Samhain in Ireland, with holiday thrones prepared for commanders of soldiers. Anyone who committed a crime or used their weapons during the celebration faced a death sentence. Some documents mention six days of drinking alcohol to excess, typically mead or beer, along with gluttonous feasts. As the Middle Ages progressed, so did the celebrations of the fire festivals. Bonfires known as Samghnagans, which were more personal Samhain fires nearer the farms, became a tradition, purportedly to protect families from fairies and witches.

Carved turnips called Jack-o-lanterns began to appear, attached by strings to sticks and embedded with coal. Later Irish tradition switched to pumpkins. In Wales, men tossed burning wood at each other in violent games and set off fireworks. In Northern England, men paraded with noisemakers. As Christianity gained a foothold in pagan communities, church leaders attempted to reframe Samhain as a Christian celebration. The first attempt was by Pope Boniface in the 5th century. He moved the celebration to May 13 and specified it as a day celebrating saints and martyrs. The fire festivals of October and November, however, did not end with this decree.

In the 9th century, Pope Gregory moved the celebration back to the time of the fire festivals, but declared it All Saints’ Day, on November 1. All Souls’ Day would follow on November 2.