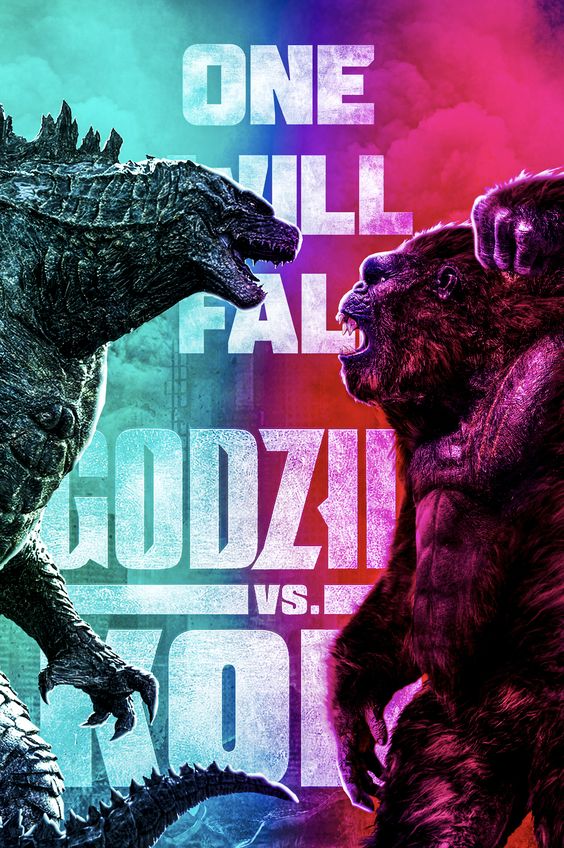 Godzilla vs. Kong is a 2021 American monster film directed by Adam Wingard. A sequel to Kong: Skull Island (2017) and Godzilla: King of the Monsters (2019), it is the fourth film in Legendary’s MonsterVerse. It is also the 36th film in the Godzilla franchise, the 12th film in the King Kong  franchise, and the fourth Godzilla film to be completely produced by a Hollywood studio. The film stars Alexander Skarsgård, Millie Bobby Brown, Rebecca Hall, Brian Tyree Henry, Shun Oguri, Eiza González, Julian Dennison, Lance Reddick, Kyle Chandler, and Demián Bichir. In the film, Kong clashes with Godzilla as humans lure the ape into the Hollow Earth to retrieve a power source for a secret weapon to stop Godzilla’s mysterious rampages.

After being delayed from a November 2020 release date due to the COVID-19 pandemic, Godzilla vs. Kong was theatrically released internationally on March 24, 2021, and in the United States on March 31, where it was also released on HBO Max simultaneously. The film received generally positive reviews from critics, with praise for the visual effects and action sequences, but criticism towards the human characters. It broke several pandemic box office records, and grossed over $467.8 million worldwide, against a production budget between $155–200 million and a break-even point of $330 million, making it the fifth highest-grossing film of 2021. Looking back on my blogging experience, from way back in 2001 when  first started reading blogs to starting my own blog (not this one) in 2002, it has given me a lot more than I bargained for. I did not think that I would be blogging as much as I have or that I would still be blogging to this day. Starting a blog from scratch, building it, growing it, and maintaining it is hard work and it has been a labour of love.

Blogging can help you build friendships and grow your community and help you in building relationships with people and have a genuine thirst for personal connection. I never would have expected that sitting behind a computer blogging could offer me that. I have made a few friends from blogging who are now Facebook, Instagram and really good friends of mine. Along with all the networking you can do through a blog, you also have the ability to connect to all kinds of people that you may have otherwise never met. You’ll be surprised by the people who stumble upon your blog and reach out to you.

Blogging was about connecting finding someone interesting and reading about them, becoming invested in them and their life. It is so much more personable than Facebook or Instagram. My blog is me on an HTML format and I mostly bare myself and my emotions on it. Like minded people can always see that and connect with me if what I write about speaks to them and especially if they happen to have had similar experiences Some of my best blogging friends were made that way.

Chances are, you’re passionate about whatever you are choosing to blog about.Blogging may also lead you to other passions as well. I also want to always explore opportunities for me to express my creativity. Blogging is such a great avenue for this! And it can lead to monetary benefits – of which I am eternally happy & grateful. But even if I didn’t make any money from all of this, I would still be blogging on a daily basis. Sitting at my laptop with a fresh cup of coffee next to me is a great way to spend a day.