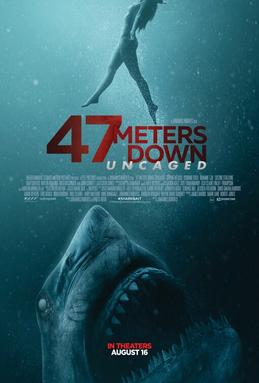 47 Meters Down: Uncaged is a 2019 survival horror film directed by Johannes Roberts and written by Roberts and Ernest Riera. The sequel to 47 Meters Down (2017), the film stars Sophie Nélisse, Corinne Foxx, Brianne Tju, Sistine Stallone, Davi Santos, Khylin Rhambo, Brec Bassinger, and John Corbett. The plot follows a group of girls who scuba dive to a sunken Mayan city, only to be trapped by a group of sharks that are swimming in it.

Teenagers Mia & Sasha are part of a mixed race family and now step-sisters after Sasha’s mom (Nia Long) married Mia’s dad Grant (John Corbett). They move to an international school in coastal Mexico. After Mia is bullied by some mean girls in school gives Mia a tooth of a great white shark he found and recounts that Mia used to like scuba diving with him and arranges for the girls to see the great white sharks in order for them to bond. The next day as Mia and Sasha sees the mean bullies are on the same boat ride, they instead ditch the ride when Sasha is invited by her friends Alexa & Nicole to instead go for a fun time together at the secret lagoon.

At the lagoon they see a floating deck at the lagoon which leads into an entrance to a submerged Mayan city, where Mia’s dad, who runs a scuba diving company, and his assistants Ben & Carl,  are working in to prepare for a visit from a group of archaeologists the following week. They find scuba diving gears and decided to check out the entrance to the underground city as Alexa has already been in there due to her dating Ben.  reaching an ancient sacrificial chamber. They encounter a cave fish who has no eyes but it scared Nicole, who accidentally knocks over a stone column causing a chain reaction, the girls get separated in the silt. Mia and Alexa find Ben, who is suddenly devoured by a shark thus dropping the guideline. The girls get reunited are chased by a shark into a tunnel causing a cave in to the lagoon’s entrance. The girls decide to go back for the guideline but encounter a shark forcing the girls to swim deeper into the city until they reach an air pocket. Mia leaves the girls behind in an attempt to find her father but finds Carl’s body instead. Grant saves her from the shark and reunites her with the other girls who came looking for her.

They realize the shark is blind, having evolved within the caves, and they are able to distract the shark with sounds and make their escape. The group surfaces at a clearing where a pulley system ascender is set in place. However, two sharks come to the surface, and Nicole panics. She attempts to climb up the rope as Alexa is going up, inadvertently causing the rope, and both of them to fall back into the water, where Nicole is eaten by the sharks. Grant tries to calm the remaining 3 girls and get them to swim deeper but he is attacked and killed by a shark. Mia, Sasha and Alexa swim into the caves alone, eventually coming upon a strong current which separates Sasha from the others. Alexa makes it to the other entrance but is attacked by one of the sharks and Mia is dragged into the current. Alexa escapes by taking off her oxygen tank, and drowns. Mia reunites with Sasha at the lower current and they swim into a newly discovered cave. At the end of the cave they find a crevice that leads to the surface but a shark appears and attacks them. Climbing up the narrow crevice they abandon their oxygen tanks to make the escape.

As they reach the surface they see the boat with their classmates are on and the staff are throwing chunks of meat to attract the sharks.Mia and Sasha get the tourists’ attention as they are attacked by the sharks. While Mia makes it onto the boat Sasha is grabbed by a shark. Mia jumps back into the water with a flare gun, and shoots the shark, freeing Sasha. Sasha reaches the boat, but Mia is grabbed by another shark, she escapes by stabbing it’s eye with the shark tooth given by Grant. Mia swims to the boat, and reunites with Sasha as the boat’s staff tend to their wounds.

It’s different enough from the first film to make it interesting. I love the concept but the CGI is poor and the scenes in darkness is hard to see properly. Yet there are some good tension filled moments and the girls are pretty.We have Stallone’s daughter & Jamie Foxx’s daughter in it as well! 6.5 outta 10!