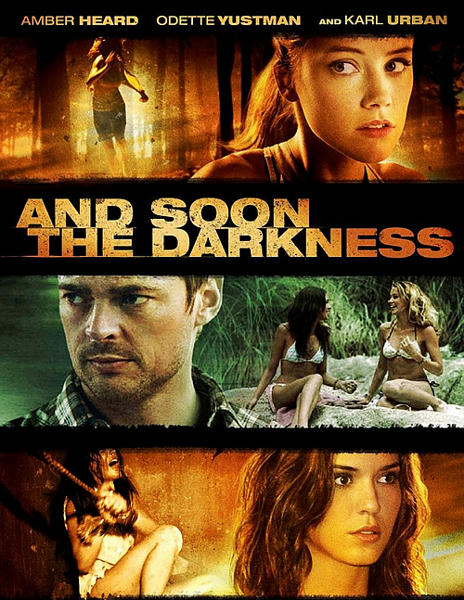 And Soon The Darkness is a remake of a 1970 British film of the same name. Instead of English girls in France, this movie is American chicks in Argentina. This Marcos Efron directed movie stars Karl Urban, Amber Heard & Odette Yustman. It’s the 70s & 80s style of horror movies where young girls and young couples in some movies get into trouble in a foreign country when they are not too careful and tragedy happens.

Stephanie (Amber Heard) & Ellie (Odette Yustman) are two friends from the US who are on a holiday in Argentina. On their last day in the country, they decided to stay on their own, away from the tourist group, cycling to a small town and staying in a hostel. After freshening up the girls head to a bar nearby where Ellie, in true horror movie fashion, decided to become the life of the party and changes the songs on the jukebox and proceeds to put the spotlight on her, cooing and dancing seductively with two local guys she just met. Why on earth do these American girls do this when they go out of their home country, I will not know or is it just movies that give me this impression? It’s either the loud flirtatious girl dancing or grinding away on the dance floor or it the loud boorish jock who drinks two beers and is all “yeah, wooo” like Rick Flair on meth!

Anyway, I digress. Ellie is pinning away for a boyfriend she just broke up with and sits mostly by herself at their table. The girls also run into an American male, who acts all brooding & suspicious so obviously he is not the villain right? Anyways, Ellie does a little too much flirting with one of the locals guys, Pedro, gets a little too rough for Ellie’s liking and Michael comes to the girls’ rescue. Pedro is chased away and the girls go to sleep. Unfortunately they oversleep due to an electronic clock getting unplugged in the mele and they miss the bus that was supposed to take them to their destination. Rather than wait for another bus, they begin their trip and head down to the nearby river to relax and enjoy their extra day off. So they cycle to a secluded area and find a lake and outcome the bikinis. Girls sun tan in said bikinis and listen to mps3 on their ipods.  The trip takes a turn for the worse when the two are separated after a heated agrument between the two best friends and Ellie is kidnapped.

Stephanie is distraught and goes to find her and runs into Michael who says he will help. But our girl prefers that a cop comes to her aid so the sole cop in charge of the town & area comes and he says that he will draw up the papers for the missing friend. Stephanie goes off to do her own search and finds an abandoned town in ruins. While there she runs into Michael so says that he is searching for his  girlfriend who disappeared months before. Stephanie finds the hide-out where the kidnapper (the guy who got rough with Ellie the previous night) has taken Ellie, who is disheveled and scared. Stephanie manages to rescue her, but Ellie is later killed by the man who kidnapped her. Later, it is revealed that the lone police officer was behind all the missing girls along with the other guy. The policeman offers to make a trade for Michael’s girlfriend, Camila, if he hands over Stephanie. The trade does not materialize and Michael gets shot.

Stephanie is captured and taken by boat across the border to Paraguay to be sold (it is also revealed that Michael’s girlfriend was also sold like many other girls into slavery) but she escapes and manages to kill the corrupt cop. She stumbles and walks her way back into town where a lady cop who was searching for her (alerted by the hostel owner) comes and gets her and takes her to safety.

6 outta 10! Not really worth getting.