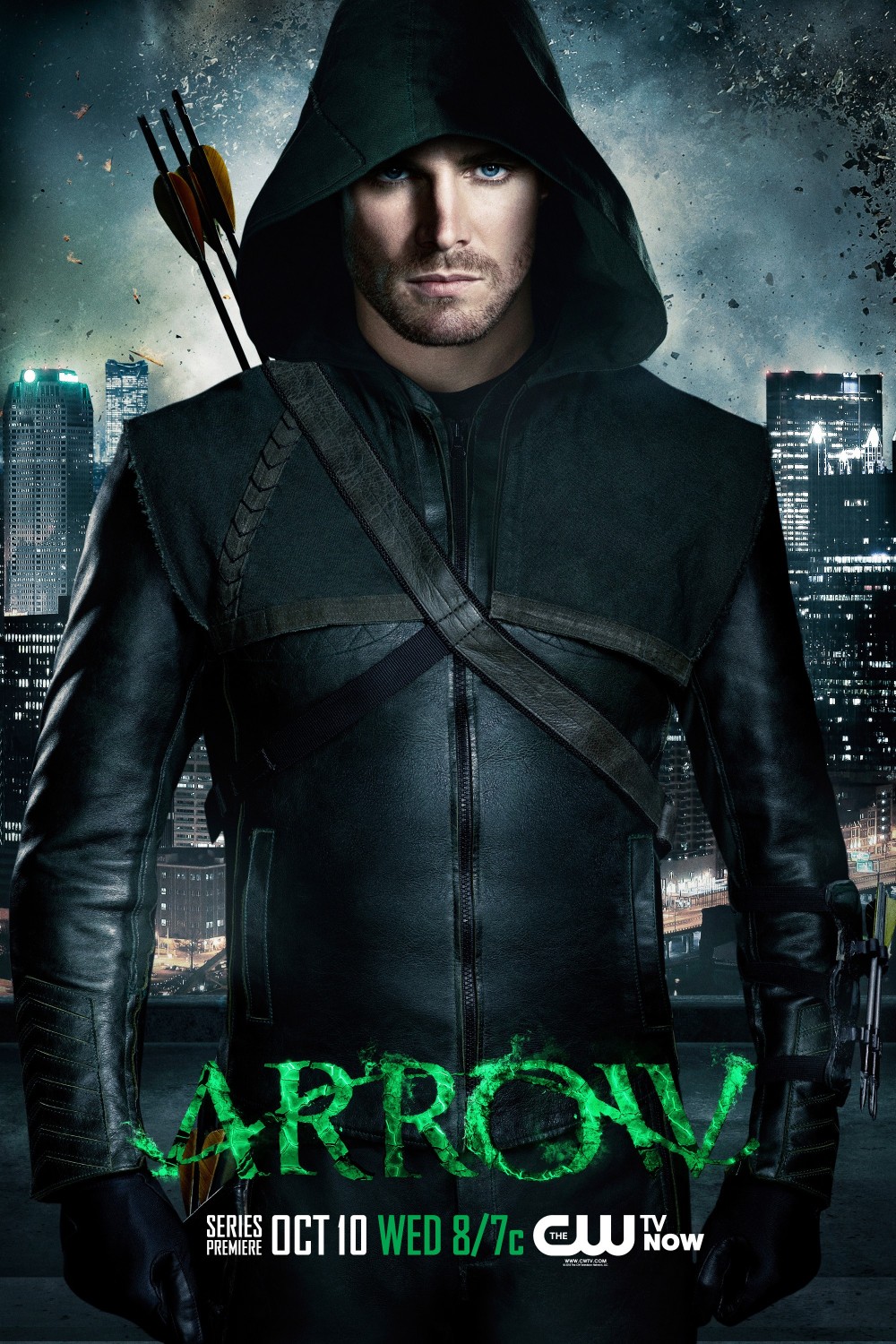 I remember very little about Green Arrow a costumed crime-fighter who appears in comic books published by DC Comics other than a couple of comics that I read way back in the mid 80s. The CW has a new series Arrow based on the fictional superhero and the Arrow universe. The series draws comparisons with both Smallville & the Christopher Nolan era Batman movies and I can see that in them. While also focusing on the romantic & family lives of the leads in the series, it also features a vigilante not afraid to kill for the good of the city and it’s residents.

Shot in Vancouver Arrow is developed by Greg Berlanti, Marc Guggenheim, and Andrew Kreisberg and stars Stephen Amell as billionaire playboy, & son of Robert Queen who helms Queen Industries, who spends five years stranded on an island following a shipwreck that claims the life of everyone else on board, including his father and Sara Lance, the sister of Oliver’s girlfriend Laurel (Katie Cassidy), a defence lawyer working in the Glades, and with whom he was having an affair. Other main characters include Colin Donnell who plays Oliver’s best friend Tommy Merlyn, Willa Holland who plays Oliver’s younger sister Thea, Susanna Thompson who plays their mother Moira Queen. David Ramsey plays John Diggle, Oliver’s partner who started out as his bodyguard but who is later told the truth and joins Oliver and becomes his conscious. Paul Blackthorne plays det. Quentin Lance, Laurel’s father and Starling City police detective who holds a grudge against Oliver and blames him for Sara’s death. Other than the main cast the major supporting roles are  businessman Malcolm Merlyn (John Barrowman); Walter Steele (Colin Salmon), the former CFO of his father’s company who is now the CEO & Moira husband & Felicity (Emily Bett Rickards) a tech whiz who later joins Oliver in his quest.

Initially we are led to believe that Oliver was alone on the island for 5 years after the yatch in which he, his father, Sara and some of his father’s people were traveling in, subsides in the ocean but as the series progresses we come to know about the true nature of the island – it is a prison camp set up by the Chinese for dangerous criminals and Oliver finds himself the target of a special military mercenary unit tasked to exterminate the prisoners. He joins Yao Fei, a special operative from Hong Kong,  Slade Wilson, an Australian Intelligence operative who came to the island to free Yao Fei and Fei’s daughter Shado and fights against the unit. The trio are also responsible in training Oliver, improving his fitness & survival skills and teaching him how to use many weapons, including the bow & arrow which he masters. What he also doesn’t tell his family & the authorities is that Robert survived the yacht sinking but killed both himself & one of his men to give Oliver all the supplies needed and a better chance at surviving. Robert entrusted his son with a small book that contains a list of people responsible for taking advantage of the city. Oliver promises his father to right the wrongs of his family, fight the ills of society, and restore Starling City to its former glory and bring the list of businessmen to justice.

Oliver will find out that his mother was also part of that group of influential men & women and that Tommy’s father Malcolm was the chief instigator. Malcolm has an alterego, a black hooded archer, and is set on destroying the Glades – a neighborhood filled with poverty and crime but where also some good people live – as it was where his beloved wife, a charitable woman, was mugged and killed while running a hospital. Malcolm is blinded by rage and craves vengance and is equal to Oliver in strength and skill and in some ways is his superior. As the series progresses Oliver must find a way to bring these men to justice, find out who set his father out to die by sabotaging the yacht (it turns out to be Malcolm) and stop Malcolm from killing a lot of innocent people. Along the way he, with the help of Diggle and later Felicity, must also protect the city from other criminals who feed drugs and violence to the citizens. Oliver also struggles with his feelings for Laurel, initially pushing her away to protect her and she & Tommy start a relationship. Oliver dates an old friend of his, a vice cop named McKenna Hall for a while but after she leaves he realizes that he cannot lie about where his heart lies. Tommy is shocked to learn of Oliver’s alter ego and is angry. As the season ends, Oliver is able to kill Malcolm but not the bomb that is set in the Glades – Tommy is killed when looking for Laurel.

Very exciting show with enough balance between the fights, intriguing drama, crime, some comedy and romance. It’s a good mix of everything that we love about a show including cool gadgets. Cannot wait for the second season.