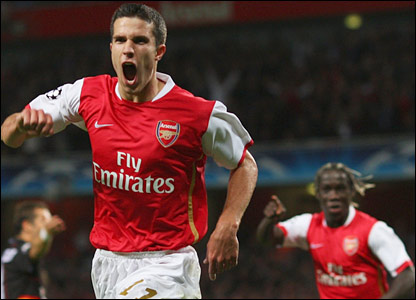 Arsenal needed to win, Arsenal just had to win. The Gunners have lost five league matches already this season, have slipped 10 points behind pacesetters Chelsea and Liverpool and are currently not even in the top four. Arsene Wenger admitted the importance of this match and said “Ideally, I do not want to be 13 points behind Chelsea so let’s make it seven on Sunday night,” he said. “We know that direct confrontations with top teams become vital when you are in our position.” Well, they did reduce the gap to 7 by beating Chelsea away!

download american in paris an movie escape to witch mountain online download national lampoon s pledge this naughty version movie However it hadn’t looked likely until the 60th minute. Johan Djorou turned Jose Bosingwa’s cross into his own net after 31 minutes to give Chelsea the lead as Arsenal’s title challenge looked to be in danger of suffering a potentially fatal blow. But, against the run of play, Robin Van Persie delivered two crucial blows to earn Arsene Wenger’s side a priceless victory. He may have looked well offside when he drilled home the equaliser after 59 minutes, then was on target again on the turn to complete a remarkable turnaround in fortunes. There should have been a 3rd but Denilson’s touch let him down after brilliant work from substitute Nicklas Bendtner.