Arsenal missed out on a place in the Champions League for the first time in 20 years despite beating Everton on the final day of the season. Arsene Wenger’s side got the win they required despite having defender Laurent Koscielny sent off for a reckless first-half challenge on Everton’s Enner Valencia. He will now serve a suspension that will keep him out of the FA Cup final against Chelsea at Wembley. Arsenal took the lead early on through Hector Bellerin’s far-post finish and Alexis Sanchez scrambled in a second after Koscielny’s dismissal to put the Gunners in control. It was to no avail as Liverpool completed their task by beating Middlesbrough to finish fourth.

The Gunners did end the league campaign with a flourish though thanks to Aaron Ramsey’s brilliant injury-time strike from 20 yards after Romelu Lukaku pulled a goal back for Everton from the penalty spot. The hosts, who also had defender Gabriel taken off injured on a stretcher, now turn their attention to Wembley, after which an announcement on manager Wenger’s future will be made. Arsenal’s failure to reach the Champions League will come as a seismic shock to a club that has made it their permanent home for the past two decades – but supporters will hope it acts as a wake-up call. The Gunners have dropped away from the serious title challengers in recent years and the failure to make Europe’s elite competition brings the recent decline under Wenger into sharper focus. Arsenal cannot afford to be fooled by the recent improvement in performances or even if they win the FA Cup against Chelsea at Wembley.

There is still real talent within the team and the idea of losing talisman and inspiration Sanchez is unthinkable. But results have proved once more that they are nowhere near title-winning material and yet another exit at the last-16 stage of the Champions League is a brutal reflection of their wider status. It now looks certain Wenger will be staying as manager and there can be no excuses for a disappointing league campaign. Arsenal’s supporters set aside any discontent aimed at Wenger to give their side full support as they chased the unlikely possibility of a place in next season’s Champions League. And it was only when news broke of Gini Wijnaldum scoring for Liverpool against Middlesbrough at Anfield that the voices of rebellion were heard. 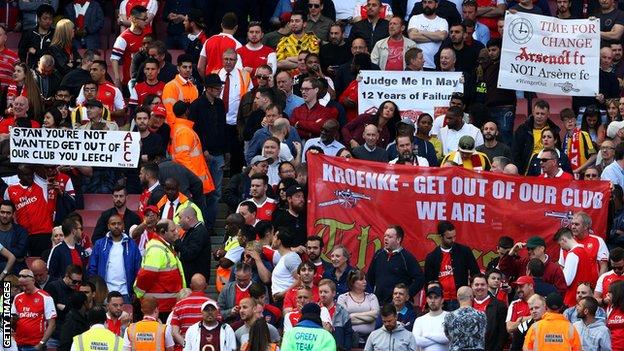 In the second half, loud chants of “Stan Kroenke get out of our club” echoed around Emirates Stadium in protest against the American owner who many Gunners fans feel has presided over Arsenal’s recent relative fall from grace. There was also a small number of protest banners unfurled after the final whistle as Arsenal’s players waited to go on a lap of appreciation. It was also done against the backdrop of Kroenke ignoring a £1.3bn takeover bid from Arsenal’s other main shareholder Alisher Usmanov, who holds a 30% stake in the club. An appearance in the FA Cup final and the possibility of ending the season with a trophy has perhaps put serious protests on the back-burner – but there is still unhappiness lurking not far beneath the surface from a fan base who are demanding better.

The Gunners have scored 95 Premier League goals against Everton – more than any club has against another in the competition’s history. Danny Welbeck provided two assists in a single Premier League game for only the second time – the other was in April 2012 for Manchester United, also against Everton. Laurent Koscielny has been sent off five times since his Premier League debut in August 2010 – no player has been red carded more in that time [Tom Huddlestone and Younes Kaboul also five]. The Gunners have conceded 10 penalty goals this season, one of just two sides in Premier League history to ship double figures of goals from the spot [Hull, 11 also this season].