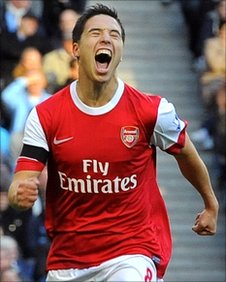 Last night Arsenal took advantage of an early dismissal for their opponents and took charge of the game. Manchester City’s Dedryck Boyata fouled Marouane Chamakh when he was the last defender five minutes in  and was promptly shown the red card by the ref. Arsenal then went ahead as Samir Nasri exchanged passes with Andrey Arshavin and fired home, before Cesc Fabregas had a penalty saved by Joe Hart. In the second half Alex Song curled home to double the lead and substitute Nicklas Bendtner slotted in a third.

The result sees Arsene Wenger’s men leapfrog West Brom, Tottenham, City and Manchester United into second, five points adrift of Premier League leaders Chelsea. Arsenal were undoubtedly helped by Boyata’s fifth-minute dismissal but the manner in which they went on to dispatch a side who spent £100m on new signings last summer was to be admired. Their display gave credence to Wenger’s insistence that you do not necessarily need to spend heavily to succeed. And while City will be left to ponder their heaviest home defeat since losing 3-0 to Blackburn in January 2007, the Gunners can go away with renewed belief in their title chances.

Strangely former Arsenal striker Emmanuel Adebayor, who warmed up for the visit of his old club with a Europa League hat-trick against Lech Poznan in midweek, was relegated to the substitutes bench.