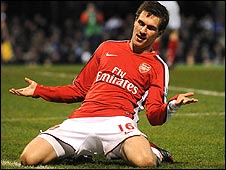 It will be a very good New Year’s eve celebration for Arsenal players, staff & fans alike after the Gunners showcased their Premier League title credentials and increased Portsmouth’s troubles at the bottom with a stunningly comprehensive 4-1 win.

They took the lead when Eduardo’s free-kick deflected in off Younes Kaboul, before Samir Nasri fired in a second. Aaron Ramsey made it 3-0 with a brilliant solo goal, hammering in from 20 yards, before Nadir Belhadj’s close-range strike gave Pompey faint hope. But Alex Song superbly headed in a Nasri cross to wrap it up for Arsenal.

When you look at the stats, except for Eduardo, these are not regular goal scorers for us. Arsene Wenger’s men keep up the pressure at the top, moving to within four points of Chelsea and staying two behind Manchester United with a game in hand on each.