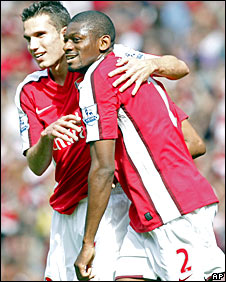 Continuing their impressive start to the new season, Arsenal beat Portsmouth 4-1 on Saturday. Abou Diaby opened the scoring with a first-time finish from Eduardo’s cut-back and doubled the lead when he tapped in Emmanuel Eboue’s cross.

Younes Kaboul headed in to give Portsmouth hope but Arsenal responded when the ball rebounded off William Gallas’s face and into the net. Aaron Ramsey slotted home a Robin van Persie pass to seal the hosts’ win.

Arsenal found themselves top of the league on goal difference temporarily but Arsene Wenger is worried about Cesc Fabregas. With their Champions League qualifying play-off second leg against Celtic on Wednesday and a trip to Manchester United on Saturday, manager Arsene Wenger was banking on the fitness of captain Fabregas, who went off at half-time with a hamstring injury.