James Doohan was an actor so typecast, it probably would’ve been easier on him to just legally change his name to “Scotty.” Doohan was the lovably-beleaguered engineer from Star Trek, and virtually nothing else. He found very little work outside of being Scotty, and his “Ah’m givin’ ‘er uhl sheh’s gut, Cap’n!” is about the only thing people remember, aside from his being the most stereotypically Scottish character in history aside from Groundskeeper Willie.

It’s really too bad that Doohan was seen as a sci-fi engineer and nothing else, because he had so much more to offer. You don’t command, fight in, and survive D-Day by being a talentless hack, after all. Doohan was a member of the Canadian Air Force around the time of World War II and was so good at what he did that he could afford to risk his life purely for shits and giggles. At one point, somebody dared him to hop in his plane and slalom between a series of telephone poles, and he successfully did just that. That stunt earned him the painfully uncatchy title of “Craziest Pilot in the Canadian Air Force.” It also earned him severe reprimands from his superiors. Still, totally worth it, bro. 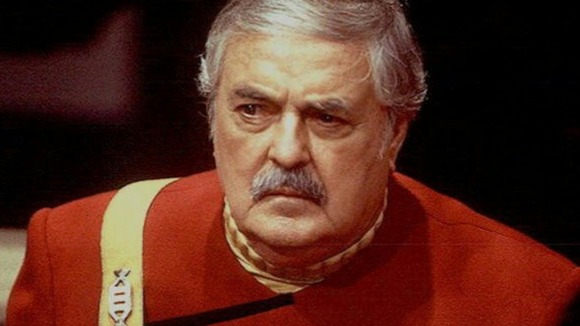 Doohan wasn’t just stunts and insanity though; he was an artillery captain, leading his men to battle during the D-Day invasion of Normandy. Doohan survived, but took one for the team. Actually, he took six for the team, as he was shot that many times in the legs and hands, ultimately leading to the amputation of his right middle finger. Now, chances are you didn’t ever see a nine-fingered Scotty while watching Star Trek. That’s because, instead of giving the character an origin tale where his fuck-you finger was shot off in a tragic Phaser accident back at the Academy, Doohan chose to hide the amputation. You rarely saw his hands close up and, when you did, they weren’t his, but rather a stunt double.