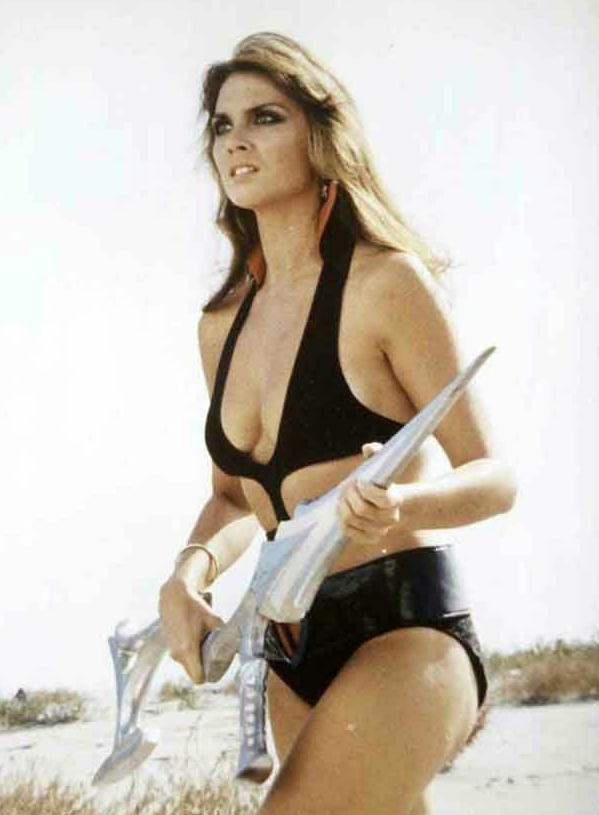 A few days ago I downloaded and watched the 1979 Scifi cult classic Starcrash. Believe it or not, it’s actually an Italian movie, although the dialogues are all in English. It’s basically a low budget rip-off of Star Wars, well parts of it atleast. It’s 94 minutes of cheap & unintentionally funny special effects that seem even more stupid when you consider the fact that it all feels so half-hearted. Even 1966 Star Trek had better effects, 13 years ago!!

When you get to the cast you just have to shake your head. David Hasselhoff, a very young looking David Hasselhoff, is the son of the Emperor of the Galaxy and is lost, presumed to be dead when his spaceship with an important mission of finding an Evil Count’s secret base, is attacked by a mysterious weapon. Two thieves, Stella Star & Akton, are set free by the Emperor in order to help find his son. They are assisted by a police chief & the most stupidest robot I have ever seen in any movie. Imagine a redneck robot – you get the picture!!

You’ve got evil count, that is so cartoonish that you just want to bitch slap him. You’ve got the mysterious sidekick, who looks human but isn’t and has got all these mystical powers, like healing and stuff. He also sacrifices himself towards the end to save the heroes. You’ve got the prince, who ofcourse wins the heart of the beautiful & sexy Stella. And we come to the centerpiece of this movie – Stella star, a beautiful and sexy Caroline Munro, who just gives you incentive to watch this movie! Hey what chance did I have – she runs around on a beach wielding that weapon and dressed in that skimpy outfit! If you thought that Prince Leia’s golden bikini was hot, what do you think of this? Stuff of fantasy for nerds & geeks like me!

And you have an almost apologetic Christopher Plummer as the benevolent emperor. What the heck is he doing in this movie? Although panned by critics, the movie later became a cult classic and still remains a favourite of those who like movies ‘which are so bad, that it’s good’. 5 outta 10 for me!