So the Gareth Bale transfer saga is finally coming to a close. Tottenham Hotspur have finally agreed the world-record €100?million (£86? million) transfer of Gareth Bale to Real Madrid. An official announcement is due to be made as early as Tuesday. Significantly, the agreement involves a straight cash deal with no players coming from Real to Spurs as had been earlier discussed when inquiries were made about striker Álvaro Morata and left-back Fábio Coentrão. The 24-year old flew into Spain on Saturday, on a private jet, and spent Sunday behind the walls of the gated complex awaiting the green light on the deal. The luxury complex was being staked out yesterday by the expectant Spanish media.

He will travel to Madrid for a formal medical and to sign what is expected to be a six-year contract, believed to be worth £8.5?million a year before tax, and could also be unveiled at the Santiago Bernabéu Stadium on Tuesday. A stage has already been erected on the eastern side of the 85,000-seat stadium alongside the directors box. Real play away to Granada on Monday night and are home to Athletic Bilbao next Sunday in what is now expected to be Bale’s debut appearance. The fee beats the £80?million record that Cristiano Ronaldo set when he moved from Manchester United to Real Madrid in 2009 although it falls short of the €120 million (£103 million) that Spurs were at one time quoting to let Bale go. Real have left the No?11 shirt vacant – and the Bale shirt has already apparently gone on sale in the club shop. 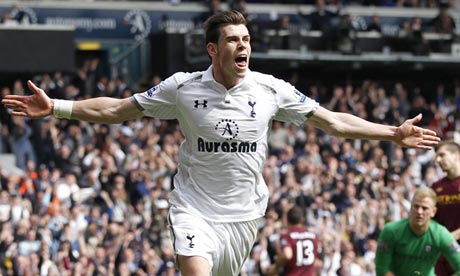