Ok, here is something I blame nostalgia for – this is a movie I last watched 31 years ago! Yes, back in 1982 when I was still a 5 year old, innocent boy. When I was young my parents would watch a lot more English language films (mostly due to less availability of Malayalam movies on VHS) as did most Indian parents when Hindi movies weren’t available. We also watched some horror movies as a family like Evil Dead, Omen & this one Basket Case– both of which I remember watching around that time, scared shitless and peeping out from behind the sofa. Now all 3 form part of their own trilogy or had sequels but I only remember watching the first of all three franchises. Basket Case is one that my sister and I remember vividly as being scary for a 5 year old and a 11 year old back in 1982. I never found a copy of it in my search till now but I downloaded the movie and watched it yesterday afternoon.

What a shit poor movie! The horror is laughable because the effects are at best amateurish and the acting is horrendous. The budget is at $33,000 and most of it was spent on the puppet and the stop animation required to show the creature move. The cast look like they were pulled out from the streets and asked to be in the film on the spot and given 5 minutes to prepare. Not that they had much to work with in the first place but anyways. And the place – especially the hotel and the doctor’s office – laughable. Is this really New York City? I would have thought that even hotels in the poorest cities in India in 1982 would be ashamed to have such classless look about them!

Anyways Duane Bradley is a young man from upstate New York. When he was born, he was one half of a pair of Siamese twins but what was attached to his side was a lump of just a deformed head & face with two swollen claw like hands on either side. At birth their mother died and their father was enraged at the sight of the monster attached to his son. From day one the father hated & verbally abused Belial, as the creature was called and only the boys maternal aunt loved Belial as much as Duane. At the age of 10, the father paid 3 doctors from NYC to surgically separated against their will. Belial was tossed aside along with the garbage but he still possess a telepathic link to Duane. The latter releases his brother who then kills their father – cut clean in half by an electrical saw – and the two brother go to love with their aunt, who doted on her nephews. After her death, Belial telepathically tells his brother to take him to the city so they can track and kills the doctors responsible for the surgery. So putting Belial in a basket (hence the title) and find a seedy motel filled with crooks, low lives & prostitutes to stay in. Duane feeds his brother copious amounts of burgers & hotdogs while he tracks the doctors. 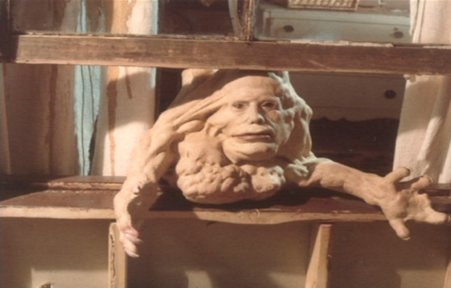 He finds doctor one, strikes up a conversation with the blonde, busty reception and meets the doctor. The “acting” of the actress is so fake, almost as fake as her hair, which I almost swear is a wig! As it is morning and there are others in the office, Duane leaves but not after getting the receptionist to offer herself as a guide for sightseeing the next day. That evening the doctor is killed by Belial (in an unintentionally hilarious scene) and returns to Duane, who is waiting with the basket. The next day Duane goes alone to see the receptionist, Sharon, and they tour the city. As they click romance sparks and they kiss but Belial can sense this and goes berserk in his room, messing things up and alerting the other tenants. He slips into the toilet to avoid the cops who investigate and Duane promises that he is never leaving him. They then go to next doctor and kill her too – in another hilarious and amateurish acting scene of epic proportions! Later an older man who tries to steal money from Duane is also killed by Belial. Duane goes to drink with the disgusting prostitute that befriends him and in his drunkenness, tells her everything but she doesn’t believe a word he says. He then tries to get rid of Sharon, fearing that Belial may kill her too and although she sees him and is scared she still wants to be with Duane, but he throws her out of the room.

That night Duane has a nightmare that he is running stark naked across a deserted NYC streets (yes you his bush & schlong) and finds a naked Sharon in bed and plays with her boobies (which are big and nice, thanks for asking). In reality it is Belial who has dragged himself to her place (impressive for a blob with no legs) and finds her naked in bed. He kills her and then proceeds to have sex with her corpse (eewww gross) and Duane finds him doing this. He grabs Belial and puts in the basket and brings him to the hotel. In the room Duane bickers and screams at Belial, who proceed to grab his brother by the gonads and struggling the two fall from the window and hang onto the neon sign of the hotel. As the other tenants watch the two brothers struggle and finally fall to their deaths.

I had enough by the 20th minute but still wanted to see the movie completely. 2 outta 10!