Battlestar Galactica is in my top 5 list of Favourite Science Fiction series & franchises. It’s either my 3rd of 4th fav but the first scifi franchise that I ever watched and hence it’s my biggest sentimental favourite. A big part of my childhood, they showed it on tv when I was 4 years old (I’m not sure if it was a rerun or the very first time that they showed it on Kuwaiti Tv) and then on and off in reruns for a couple of years. I had a couple of episodes of Battlestar Galactica and Galactica 1980 recorded on VHS tapes and my cousins from the UK also had some.

Many, many years later the original film was the very first DVD I ever bought, sometime in 2003, and I still have it here somewhere though I have still bought another better copy. And then ofcourse they rebooted the show in 2003 with the miniseries and the 2004-2009 series as well. I only watched the show for the first time back in 2011 and although I do agree that the newer version is well acted and is an awesome show, the original is still a big deal for me and I prefer that storyline.

Just somethings about the story and plot sticks with me a lot and several times during the week I find myself mentally revisiting the show. So it’s only natural that I should try and get some Battlestar Galactica models or kits and even some action figures. I have looked at getting some for quite a while now and my usual purchases since last year when I started buying scifi models and ships online have been restricted to Star Trek. But I have checked options for BSG and others and been eyeing several items from eBay and Amazon sellers.

Mostly I wanted the ships – the old & new Cylon Raiders, the Galactica herself and a few Cylon models. I have finally bought my first BSG related model, it’s the Cylon action figure you seen on the top left over there. This will reach me in a few days. Sometime next month I am looking at getting the old and new Cylon Raiders as well from Habro. They are smaller than Eaglemoss’s Star Trek collection but they look good and are mostly diecast. 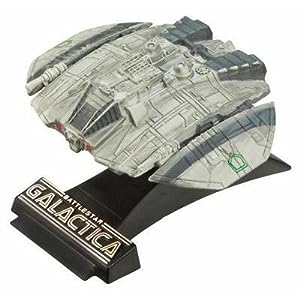