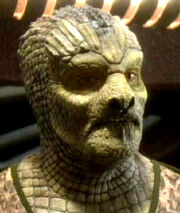 I finally like Star Trek : Deep Space 9 enough to download the series and start watching from scratch. Captive Pursuit is the 6th episode of the 1st season. It’s episodes like this that reminds me why I feel that the franchise is the best thing to ever happen for television.

Tosk is a reptilian-humanoid species bred for pursuit; to trained to be excellent prey by a hunter species. The hunters are another race also part of their planet that lies in the Gamma Quadrant. Tosk are only sentient because the Hunters made them this way (this implies a degree of genetic engineering on their part). The meaning of life for a Tosk is to outsmart the Hunters for another day. The only greater dishonor for a Tosk than being captured and returned to their home planet alive is to seek protection from another race. They take an oath of silence regarding the hunt preventing them from even talking about it with anyone else. The Tosk are treated with respect and admiration by the Hunters.

Now, this cannot be understood by human beings. In this episode, the Tosk is befriended by Chief O’Brien, who cannot come to terms with the fact that his new friend has to endure a life of being treated as prey and, since he is caught in the jail of another species, will be shamefully exhibited back on their planet. O’Brien defies his commander’s order & helps Tosk escape and thereby restoring his dignity & honour – the hunt goes on.

Can you imagine an exsistence like that? Being bred only for becoming someone else’s prey. What kind of an exsistence will that be? And yet, in Tosk’s case that is the only life he has known. Or even wants!