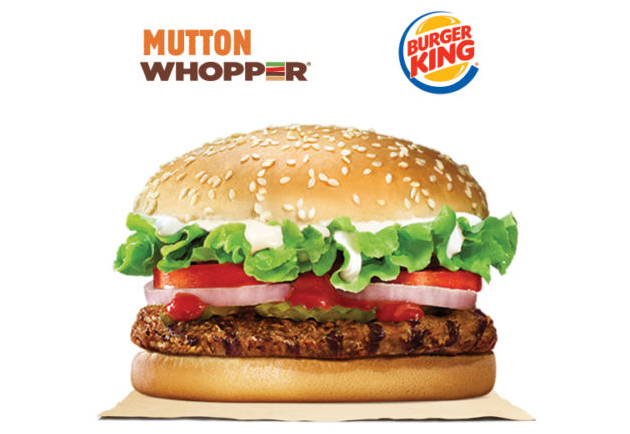 US based global hambuger/fast food restaurant chain giants Burger King will be launching in India this Sunday (9-11-2014) when they opens their doors at noon , on November 9 at New Delhi’s Select City Walk mall. And they found the most original way to launch by cashing in on three crazes of young India – pre-ordering, online shopping and fast food – by having some customers order their burgers, fries and drink via ebay. 1,200 Indians have already pre-ordered the chicken, mutton or veg versions of its signature Whopper sandwich for 128 rupees (just over $2) each. Just like other fast food chains, beef is not on the menu!

According to eBay, 540 chicken, 380 mutton and 240 vegetarian ‘Whoppers’ have been sold. Burger King India on Thursday said that there will be a separate queue for customers who ordered their burgers online through eBay. Florida based Burger King is the world’s second largest burger chain, after McDonald’s, with over 13,000 stores in 79 countries but is making a late entry into India where rivals like McDonald’s, KFC, Pizza Hut and Subway are already well entrenched (atleast in major cities). For instance, category rival McDonald’s has been in India for nearly two decades. Burger King chain plans to have a dozen outlets across the country in the coming months. In keeping with religious sentiments of India’s majority Hindus, beef is off the menu and so is pork which is shunned by Muslims (damn it). Like its rivals, Burger King will Indianize its menu to include items like Paneer King Melt, its sandwich filled with local cottage cheese.

After Delhi, Mumbai will be up next and you can be sure that Bangalore, Chennai, Calcutta and Hyderabad will be on the radar in the coming months. Their plan is to to open a few hundred stores here over the next ten years. I hope my city is on the list sooner rather than later. And though I can understand “no beef” why not offer pork / bacon as an option? Don’t eat it if you don’t want to!

One thought on “Burger King Launches In India This Sunday”