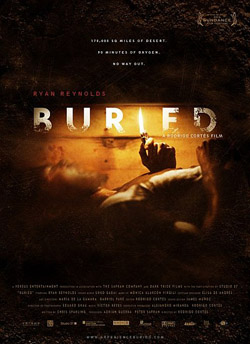 Giant blockbusters with budgets beyond most countries GDP, special effects beyond yours or my imagination & multi-big star cast? How about a movie that was made on a budget of less than $2 million and has just one actor (for atleast 88 of the 90 minute screen time) who we get to see. The rest of the cast are just voices that we hear on the phone and a brief minute or so of a woman getting shot, seen on a video clip on the main actor’s phone.

Ryan Reynolds plays the protagonist, Paul Conroy, in Buried. Paul, who is a truck driver based in Iraq, wakes up bound & gagged inside of a wooden coffin along with a few items – a Zippo, his whiskey flask, a flashlight, glow sticks, a pen, a folded piece of paper and a BlackBerry. He & a convoy of other truck drivers were ambushed by Iraqi insurgents, leaving him as the lone survivor. He is contacted by the kidnappers and they demand that he contacts the American embassy and get them $5 million as a ransom money for his release.

Reynolds & director Rodrigo Cortez both do a wonderful job of creating a claustrophic effect with camera angles and minimal lighting, mainly from the BlackBerry, glow sticks, lighter and flashlight. The emotional & frantic acting as Paul wakes up – confusion, panic & then realization setting in and he needs to keep his wits with him, is all played out well. We see Paul reach out for help to his wife, his employers, the FBI, as well as his kidnappers. Even in the midst of this tension & suspense, Reynolds also gets out a humorous scene in dealing with a friend who initially cuts his call when he gets emotional. Also riveting are the scenes where he has to deal with the kidnapper, trying to negotiate his release over the phone.

Ryan’s acting is best when he pleads the kidnapper not to kill his colleague, who is still alive albeit as a prisoner of the Iraqi insurgents and shooting the videos that they want. He has to cut his finger, filming it on the mobile while doing so and send it to the kidnappers. The scene in which Paul has to fend off an unexpected guest, a poisonous snake, that crawls into the coffin through a hole in the coffin is also riveting. The hope of being freed is what keeps him alive, as an FBI agent calls him with the news that they were given the details of where to find a man buried alive, although he at one time almost kills himself with the knife. The sand & dirt filling into the coffin after the bombing of the area is once ironic & heart-wrenching – its’ the US army’s bombing that ultimately kills him. The FBI handler who tries to reach him is forced to concede defeat as he realizes that he won’t reach Paul in time and as the sand fills into the coffin, closing Paul inside and killing him, the last words heard are the FBI agent saying through the phone ‘I’m sorry Paul’.

Amazing acting by Reynolds and good solid work by the director & crew. I would recommend this movie to anyone who want to watch something vastly different from the usual fare. 8/10 for the film and 10/10 for Ryan Reynolds.

One thought on “Buried”