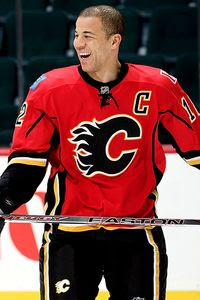 The Calgary Flames have traded Jarome Iginla to the Pittsburgh Penguins. A few years ago, it would have been impossible to imagine the  Flames without Jarome. Now, it’s reality. Iginla, the face of the Calgary Flames franchise for more than a decade and captain, was traded Wednesday to the Pittsburgh Penguins Wednesday night in exchange for a couple of forwards currently in the NCAA ranks — Kenneth Agostino and Ban Hanowski — and the 2013 first-round draft choice.

Iginla, who was acquired in the 1995 trade that sent then captain Joe Nieuwendyk to the Dallas Stars, would end his Flames career with 525 goals, 570 assists for 1,095 points in 1,219 regular season games. He has twice won the Maurice “Rocket” Richard Trophy, claimed the Art Ross Trophy in 2001-02 and the Leaster B. Pearson Trophy in 2001-02 – the players’ award for most valuable player. The deal is the start of a much-needed rebuild for a team which appears destined to miss the playoffs for a fourth consecutive season, and been criticized around the hockey world for seemingly being unwilling to go away from icing a veteran-laden team while other clubs are turning to more and more younger players.

With the trade, he joins a Pittsburgh team that’s a legitimate Stanley Cup contender and can team up with Sidney Crosby, with whom he combined for the golden goal at the 2010 Olympic Winter Games. Other players who could be potentially dealt include defencemen Jay Bouwmeester and Mark Giordano, forwards Lee Stempniak, Alex Tanguay and even Curtis Glencross, who also has a no-trade clause. As sad as it to see a committed player & beloved by the fans leaving a team he had always intended to stick around with for the entirity of his career, the Flames badly need to shake things up and rebuild. I fully expect the team to be very active in the summer, making a lot of trades and trying to go for younger players and prospects from the juniors.