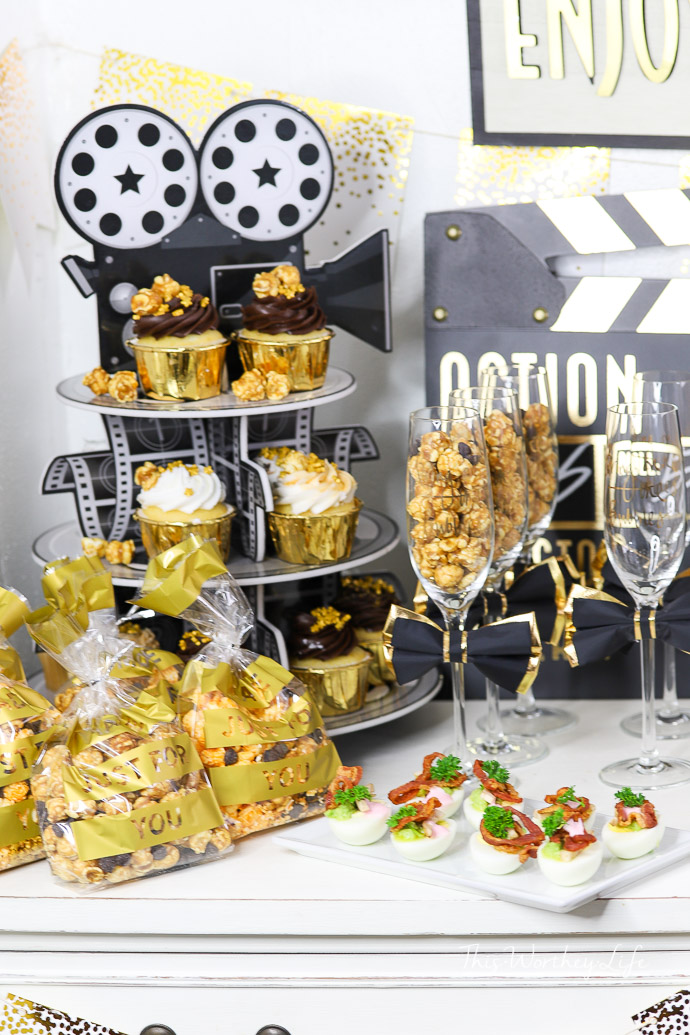 Every party needs food. Get fancy with food-centric Oscar party ideas! Serve plenty of appetizers, like gourmet popcorn in cute buckets, bruschetta, smoked salmon, deviled eggs, meatballs, and tiny fruit parfaits. An Oscar party is the perfect excuse to go all out with a charcuterie board. (If you’re short on time, Trader Joe’s sells a wide variety of frozen appetizers that look as good as they taste). Stick with the Oscars color scheme and use black and gold plates, cups, napkins, and utensils.

Setup the ultimate movie theater experience at your Oscar party, buy putting out a candy buffet and rent a popcorn machine/maker. You can get popcorn buckets with Oscar themed designs on it. Use glass jars to display candy-like black Twizzlers, a whole lot of M&Ms (or Smarties or Gems if you are in India), gummy bears, candy cane, Ferror Roche and assorted chocolates. Milkshakes, colas, juices and a coffeebar should also be included.

For more solid food, how about star shaped sandwiches? Cheese, veggies & deli meat all cut in a star shape and assembled to make nice grilled or toasted sandwiches. Also you can try to find cupcakes or small cakes that are decorates with the Oscar or in tuxedos to make for fancy desserts. Have a game of dumb charades before the event, themed around famous Oscar winning movies and actors. Pick up acting out lines of famous dialogues.

When the event starts all of you can gather in front of the large screen tv/screen and do predictions and cheer on your favourite winners.

The Age Of Adaline : This romantic movie, starring Blake Lively and Michiel Huisman, follows a woman, Adaline, who has stayed 29 years old for decades. Because of this, Adaline knows she can’t fall in love—but she does, of course, with a man she meets on New Year’s Eve. Stream this one if you want something beautiful to accompany your NYE in.

About Time : A delightful British romantic comedy you may have missed, About Time stars Rachel McAdams and Domhnall Gleeson as Mary and Tim, a couple whose story continues to be rewritten thanks to Tim’s ability to travel through time. Though its moral is something like “The grass actually isn’t always greener,” one of the film’s best scenes is when Tim keeps hopping back in time to get a New Year’s Eve kiss just right.

Ocean’s Eleven (2011) : Danny Ocean (George Clooney) is one of cinema’s most charismatic masterminds—and on New Year’s Eve, one of his most ambitious heists begins. It doesn’t matter if you’ve already seen the original Ocean’s 11; the plot’s ingenious twists will continue to delight.

Ghostbusters II : Everyone’s favorite supernatural crime-fighters return to the screen for a sequel with all the same players: Ivan Reitman directing; Bill Murray, Dan Aykroyd, Harold Ramis, and Sigourney Weaver starring; New York City as the setting. But this time, there is no Stay Puft Marshmallow Man. Rather, the Statue of Liberty comes to life and slimy spectral activity is oozing onto the streets, just as the New Year’s Eve festivities kick into high gear. 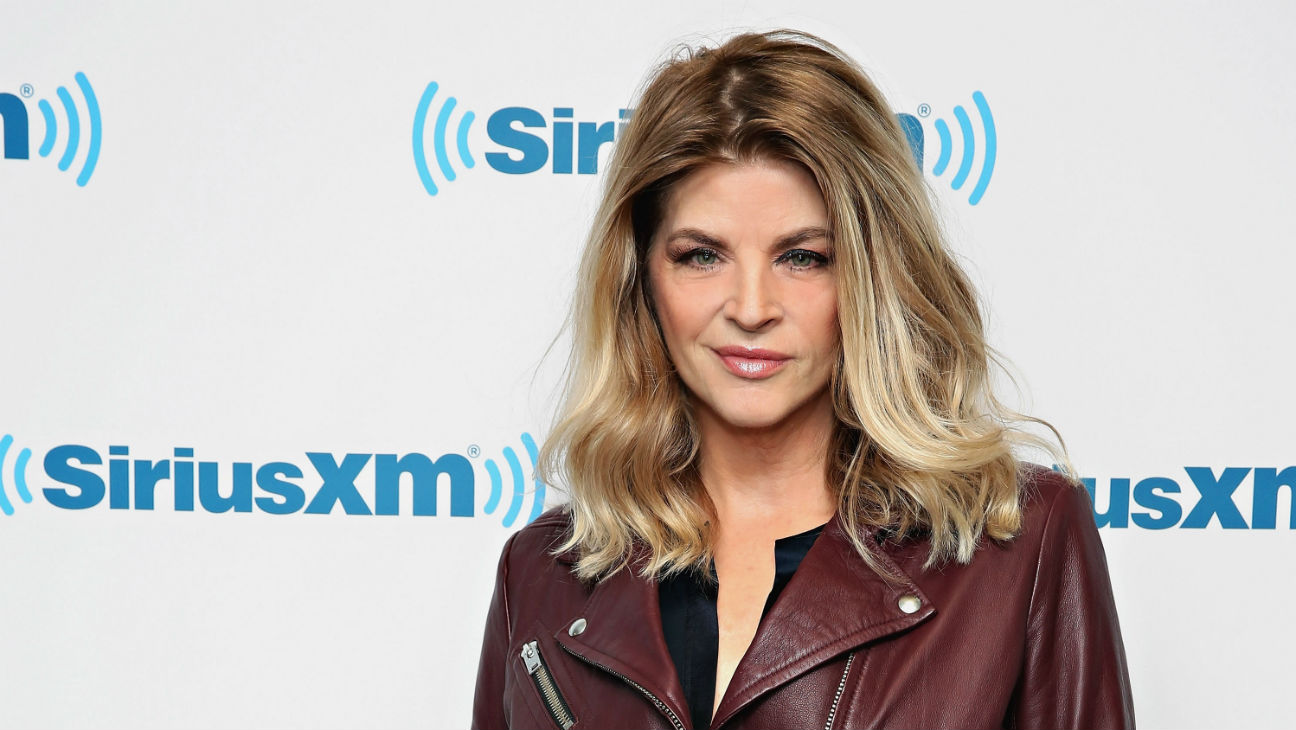 Actress Kirstie Alley, best known for her role in the comedy series Cheers, the Look Who’s Talking movies & Star Trek in the 1980s and 90s, has died of cancer at 71, according to a family statement. Her breakout role was as pub manager Rebecca Howe in the NBC sitcom Cheers (1987–1993), for which she received an Emmy Award and a Golden Globe in 1991. From 1997 to 2000, she starred in the sitcom Veronica’s Closet, earning additional Emmy and Golden Globe nominations.

In 2005, she played a fictionalized version of herself on Showtime’s Fat Actress. She later appeared on Kirstie Alley’s Big Life (2010), and was a contestant on the 12th season of Dancing with the Stars (2011–2012), finishing in second place. In 2013, Alley returned to acting with the title role on the sitcom Kirstie. In 2016, she appeared on the Fox comedy horror series Scream Queens. In 2018, she was a contestant on the 22nd series of the British reality show Celebrity Big Brother, in which she finished as runner-up.

Alley was married from 1970 to 1977 to high-school sweetheart Bob Alley, who coincidentally had the same name as her father. Alley married actor Parker Stevenson on December 22, 1983. Following a miscarriage, the couple adopted son William “True” one week after his October 5, 1992, birth, and in 1995 adopted daughter Lillie. The marriage ended in 1997. In 2016, Alley became a grandmother after her son William had a son of his own.

You’ve Got Mail (1998) : While the whole movie has great foliage scenes and a crisp, autumnal vibe, the scene where Joe rushes to the front of Zabar’s cash-only line to vainly save a work enemy (or so he thinks…) actually happens on Thanksgiving Day. One of my favourite movies of all time  Tom Hanks and Meg Ryan stars as two people in an online romance who are unaware they are also business rivals. Movie magic.

Planes, Trains & Automobiles (1987) : Travel stress is nobody’s favorite part of Thanksgiving, but watching Steve Martin and John Candy as an odd-couple duo of hapless travelers trying desperately to get home for Turkey Day will help you laugh off your own struggles.

Paul Blart: Mall Cop (2009) : You’ll probably feel pretty good about your decision to forgo staying up late for Black Friday deals after watching Kevin James play an overzealous New Jersey mall cop facing a Black Friday heist. The film tells a story of Blart, a single dad and bumbling mall security guard, who finds himself in the middle of a heist and the only one in position to rescue hostages.

Sweet November : The essential autumn vibes in this bittersweet romance about a mismatched couple (Charlize Theron and Keanu Reeves) who agree to live together for the month of November. The film is based on the 1968 film Sweet November written by Herman Raucher, which starred Anthony Newley  and Sandy Dennis; however, it has a different ending.

Autumn in New York (2000) : The entire “fall in Manhattan” atmosphere will give you all of the Thanksgiving feels.  Starring Richard Gere, Winona Ryder, and Anthony LaPaglia and Written by Allison Burnett, the film follows a successful middle-aged restaurateur and womanizer who falls in love with a sweet young woman who is terminally ill.