I watched another favourite episode from Star Trek Enterprise last night- this one is called “Cogenitor”. Although a similar concept had been done in Star Trek The Next Generation, I find this episode to capture the concept better and it sticks in my mind a lot. I have seen this episode 3 times now and I love this episode and find it to be though provoking, sad and tragic all at the same time. This is what Star Trek or any good science fiction does to you when it is well. It resonates with you long after the episode has ended and since I first watched this episode back in 2006, it still is fresh in my memory.

The crew of the Enterprise is studying a hypergiant star when they are hailed by an alien species that they had never met before, The Vissians, who are traveling on a much larger spaceship. The technically more advanced Vissians are friendly and open to do First Contact with the humans and sharing knowledge. While captain Archer joins the Vissian captain on a smaller shuttle to conduct surveys and explore the inner workings of the star, Enterprise’s Chief Engineer Commander Charles ‘Trip’ Tucker befriends his Vissian counterpart and his wife. While eating food in the Enterprise mess hall Trip learns that the Vissians have 3 genders : male, female and cogeniter. With the Vissian engineer & his wife is a cogenitor, who are essential for Vissian couple who plan to have a baby – they supply an enzyme during the sex act which facilitated conception. Cogenitors make up about 3% of the Vissian population, are treated in a very pragmatic way, being shipped from one couple to another to keep the population growing. A side effect is that they are treated like objects, not deserving names nor education.

Trip is fascinated with the cogenitor and makes friends with “her” (as the cogenitor feels more female to him and is played by a female actor anyway) after he learned from Dr. Phlox’ analysis that they have the same intellectual potential as the two other sexes. He teaches it how to read and tries to make it understand that it has the same rights as the rest of its species. He gives her a pad and is pleasantly surprised when she learns to read quickly. He then sneaks her into the Enterprise and shows her around the ship and shows her a movie in his quarters. He teaches her to play the board game GO and is amazed when it beats him at a game, since the engineer has been undefeated for the last two years. Later T’pol is contacted by the Vissians who are upset with Trip and deny him access to their ship. She then debates him on the touchy nature of First Contact and especially with the Captain away for 3 days. When Archer comes back the cogenitor sneaks back to see Trip and asks Archer for asylum – because she won’t be able to have a decent life among her own people or do any of the things that Trip tells her about (get an education, go rock climbing, etc). The Vissians are angry as their chief engineer and her wife had to wait a long time to get the cogenitor and also they felt that the humans couldn’t possibly comment on practices of a culture that they barely know. Archer is furious at Trip, even though he wishes he could accept the cogenitor’s request for asylum, and in order to not offend the Vissians, Archer refuses. 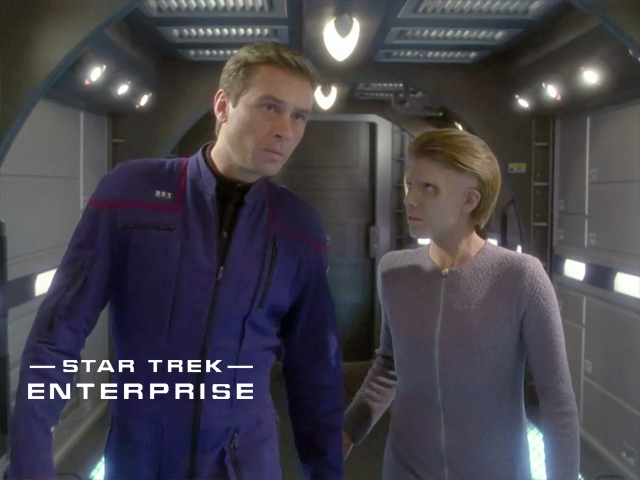 The two ships depart and both captains are still optimistic about hat the incident will not interfere with the relation between  Earth  and Vissia, the situation gets a lot less bright when Archer learns that the cogenitor committed suicide, an evident result of the independence it developed out of Tucker’s teachings. She learned of possibilities she had never known till now and having them denied to her was  too much for her to bear. Archer  severely reprimands him for his interference, as it has not only resulted in the cogenitor’s death, but now the Vissian couple will not be able to have a child for a long period of time. Tucker is deeply shocked, as Archer reminds him that despite all his time on Enterprise, he still compares other cultures to Earth standards and interferes without thinking first. Archer is upset that first contact with the Vissians led to this conclusion, and Tucker begins to realize the consequences his actions can cause.

It is a good reminder to all of us that we have to think before we react and criticize another culture just because their ways are not the same as our own. Another culture may eat different food, have different ideas about family, sexual preferences, marriage, homes, employment, language, accents, medical practices etc. They may seem weird & alien initially but unless we take the time and effort to understand them, we cannot deem ourselves fit to comment, criticize, debate, lecture or discuss about the said culture. This will be crucial if humans ever do have contact with an alien species in real life. It seems like a distant possibility for now but if we ever do, the lessons from this episode will be crucial.

Before I end this post I must say that this does not apply to various cultures on earth among us humans. That is another post for another day :)