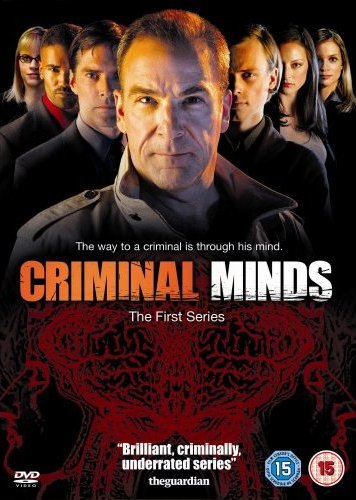 Criminal Minds, is an American police (in this case FBI) procedural television show which premiered in September, 2005. The series follows a team of profilers from the FBI’s Behavioral Analysis Unit (BAU), which is part of the FBI National Center for the Analysis of Violent Crimes, based in Quantico, Virginia. The series is based on special agents  Jason Gideon (Mandy Patinkin), Aaron Hotchner (Thomas Gibson), and the rest of the Behavioral Analysis Unit, hereafter referred to as the BAU team. For the first season, that team is composed of Elle Greenaway (Lola Glaudini), Derek Morgan (Shemar Moore), Dr. Spencer Reid (Matthew Gray Gubler), Jennifer “JJ” Jareau, (AJ Cook), and computer / data expert Penelope Garcia (Kirsten Vangsness). When the series premiered, Vangsness was not in the regular cast, appearing instead as a guest star.

The season starts with agent Gideon rejoining active duty by joining the BAU team led by supervisor Hotchner. Elle is a new member of the team who is made permanent after the first case of a serial killer in Seattle. From the second episode onwards agent Jennifer joins the team.  JJ acts as the team’s liaison with the media and local police agencies, usually hanging out with Garcia if the two are in the office. As the series progresses, JJ moves more into the filed, liaisoning in the different cities they travel to. The team soon is in the thick of things, solving a serial arsonist case in one episode and a copycat bomber before traveling to San Diego to help stop a serial rapist and murderer called the “Tommy Killer” by the local media because he glues his victim’s eyes wide open after raping and murdering them.

One of the more disturbing cases is a serial killer who takes families hostage and spends time with them acting as a father figure during what is supposed to be their family vacations. Then we have Elle, along with four civilians, is held hostage on a train in Texas by a paranoid schizophrenic who is convinced that the U.S. government are monitoring him through a microchip in his arm. Reid and Gideon are forced to play into the man’s fantasy to save the people he has taken hostage. This episode is based on a real person’s case. Then there are the murders in a small town which the killer, a teenage frames to look like that of a Satanic cult who are based in the area. There are cases of cannibalism, child abduction, a vigilante, a sexual serial killer in Mexico who targets older women and a charmer who dates women and then drown them. But my favourite is the one of two serial killers, where the woman is innocent but faked her 2 year old son’s death so she could save him from her psycho killer husband. 15 years later Gideon tries to save her but she blames herself for not being able to save the girls her husband killed and is happy that her now 17 year old, living with adoptive parents, is healthy & growing up safe. Very moving.

The season ends on a cliffhanger in the Fisher King, a burnt victim man who has abducted his own daughter. While on their separate vacations, each member of the BAU receives a clue from a psychotic killer obsessed with Arthurian legend who challenges them to save his next victim. Elle is shot critically in her home by the killer, who is enraged when they break one of his “rules”. The second part of this two parter will be the first episode of the second season.