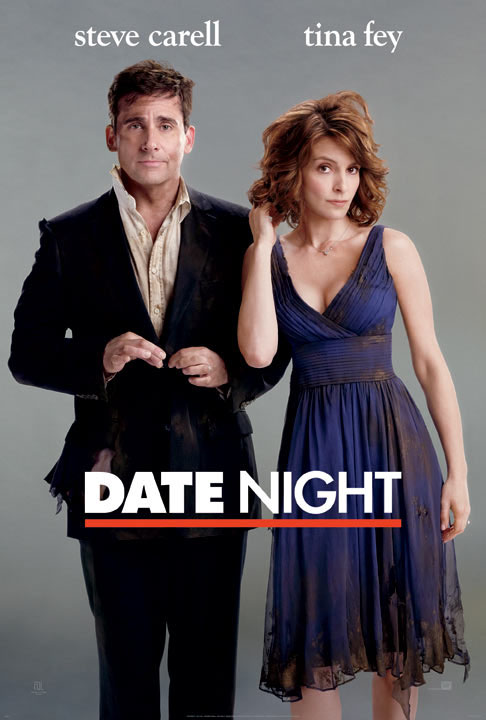 When you have Steve Carell & Tiny Fey as a  married couple, you have one funny movie. Date Night is directed by Shawn Levy and starring the comedy duo as a couple caught in a mess in the city and having to unravel it so they can get back to their home in New Jersey. Along with the comedic veterans you have supporting roles from Ray Liotta, Kristen Wiig, Mark Ruffalo, Mark Wahlberg, Mila Kunis, Leighton Meester, Taraji P. Henson & James Franco.

The Fosters, tax lawyer Phil & realtor Claire, juggle their work with raising two boisterous kids who tire them out. They have a routine and stick to it and at the end of the day they collapse on their bed too tired to be intimate yet each too polite to ask for anything. Claire in particular feels particularly worn out as she feels that she has to do a bulk of the work and especially since Phil never seems to close any drawers he opens. Every week they have a date night, where they go to a movie & then to the same restaurant for dinner, where they order the same dishes. When their friends, a married couple, inform them that they planning to divorce to escape the married-life routine and to have more excitement in their lives, Phil in particular gets scared.

To shake things up the next date night, Claire dressed up more than usual and Phil suggests that they skip the movie and go to a new restaurant that has been getting rave reviews. When they are unable to get a reservation, Phil takes a reservation from a no-show couple, the Tripplehorns, despite Claire’s misgivings. As they are enjoying their dinner, two men approach them and ask them to step outside. Thinking that the men are the hotel staff, they agree but the men start asking them, the Tripplehorns about a flash drive they believe Phil and Claire stole from mobster Joe Miletto.  Phil and Claire try to explain that they are not the Tripplehorns, but the men threaten them at gunpoint. Not seeing any other way out, Phil tells them the drive is in a boathouse in Central Park. At the boathouse, Claire pretends to show them where she buried the flash drive, while Phil gets a paddle  and hits the two men.

The couple escape in a boat and make their way to the police station and speak to a officer, Arroyo. However when Arroyo steps out the Fosters sees Collins & Armstrong at the station; it turns out that they also detectives, presumably on Miletto’s payroll. The Fosters sneak out of the station and decides to try and find the real Tripplehorns. . They return to the restaurant and find the Tripplehorns’ phone number. Claire remembers that Holbrooke Grant , a prospective client who ended up buying a house from another realtor, was a security expert & former government agent. They break into the realtor’s office, find Grant’s address and go to his house. Using his help they track the signal of the cell phone number and find out that the Tripplehorns are actually a couple called Melton. Seeing Collins & Armstrong arriving at Grants house, the Fosters sneak out and take Grant’s Audi. At their apartment, they find that Taste & Whippit Melton,went to the restaurant but left when they spotted Collins. They give the flash drive to Phil and leave.

The Fosters are leaving in the Audi when Collins & Armgstrong catch up with them and start shooting at them. They crash the Audi into a taxi but keep going until they hit an SUV. After evading Collins and Armstrong, Phil sees the contents of the flash drive but is not able to save it as it falls into the river along with the taxi. The contents are some documents & pictures of district attorney Frank Crenshaw  with prostitutes from a strip club. Apparently Melton took the photos as his wife works at the same club and planned to blackmail the DA and Collins & Armstrong actually are corrupt cops who work for the DA. The Fosters ask Grant for additional help and get into the club with Claire under the guise of a new prostitute and Phil as her pimp. After doing a pole dance for Crenshaw, they confront him and tell him they are the Tripplehorns. Crenshaw, Collins & Armstrong force the couple to the roof. Miletto arrives with henchmen and it is revealed that Crenshaw has been paid by Miletto to keep him out of jail. When Phil mentions the photos, a fight escalates between the mobsters and Crenshaw, Collins and Armstrong.

The cops soon arrive as Phil had been wired by Grant to record the conversations & goings on and Grant informed the cops. Arroyo apprehends the men and offers the Fosters a ride back home. However Phil takes Claire out for an early breakfast before they make their way back home and make out on the front lawn.

Fun, hilarious in places. I liked it and though that the cameos from the known actor worked well into the plot. Good job  7.5 out of 10!