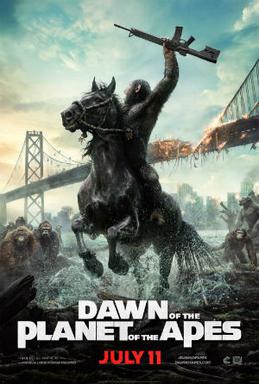 From director Matt Reeves and written by Mark Bomback, Rick Jaffa and Amanda Silver, comes the 8th movie from the Planet of the Apes franchise and 2nd in the reimagination of this science fiction series. The movie stars Andy Serkis, Jason Clarke, Gary Oldman, Keri Russell, Toby Kebbell, and Kodi Smit-McPhee. It is the sequel to the 2011 film Rise of the Planet of the Apes.

Ok so after the events of the previous film, the virus spreads across the globe and a lot of humans die as martial law takes over in some places and the economy crumbles. The surviving humanity is made up of people who are immune to the virus and who live in ruins of once proud cities. Caasar remains as leader of a new generation of apes in the Muir Woods where they have created a community of their own. 10 years pass by and a small group of humans are making their way through the woods when they come across two apes Caesar’s son Blue Eyes and Rocket’s son Ash; one of group, carver, panics and shoots Ash wounding him. Blue Eyes calls for the other apes who surround the humans but Caesar lets them go. As the humans reach the guarded tower where they live in San Francisco, Koba a bonobo still scarred by his previous mistreatment at the hands of humans, prompts Caesar to warn the remaining humans. So Caesar and his apes head to the tower and hands over a bag that a boy in the group had dropped and conveys the message that while the apes do not want war, they will fight to defend their home. He then demands that the humans stay in their territory and states the apes will stay in theirs, too. The apes then leave.

The humans want to attack the apes with the weapons found in an armoury as they need to fix a hydro-electric dam that lies in the woods to fix their power needs. Malcolm, one of the human leaders, convinces his fellow leader Dreyfuss to wait for 3 days and takes a small group, including his son Alexander and his second wife Ellie, and heads back to the forest where he pleads to Caesar to let his people work on the dam. The humans bond with Caesar and some of the apes as they work to fix the dam but Carver almost ruins it when he threatens Caesar’s baby son with a shotgun he had concealed. Malcolm & Ellie manages to calm things down, especially as Ellie treats Caesar’s ill wife with some antibiotics she has in her bag, and has Carver banished to the vehicles where he is to wait until the work is finished. Koba however wanders into the city and discovers the armoury and humans testing the guns and heads back to confront Caesar taunting him over his ‘love for humans’. In response Caesar beats him up but doesn’t kill him as he believes that “Ape shall not kill ape” and forgives Koba, who however eturns to the armory, steals an assault rifle and murders two human guards. He then secretly kills Carver, stealing his lighter and cap.

By this time the dam is fixed restoring power to the city. In the woods the humans are saying goodbye to Koba lights fire to some of the apes’ homes and unseen by everyone except Caesar, he shoots Caesar with the rifle. With their leader presumed dead and “finding” Carver’s cap and rifle, Koba assumes command and leads the apes towards the city to battle the humans. They raid the armoury and head towards the tower. Despite heavy casualties, the apes breach the gates using a hijacked tank, overrun the tower and imprison all the humans as Dreyfus flees underground. When Ash refuses Koba’s orders to kill unarmed humans, citing Caesar’s teachings, Koba kills Ash and imprisons all those known to be loyal to Caesar. Malcolm’s group, who had hid in the bushes when they saw the apes on a rampage, head back and find a barely alive Caesar and take him to the city prompted by Caesar to the house where he lived. Caesar reveals to Malcolm that Koba shot him, realizing his notion that all apes were better than humans was naive. Malcolm sneaks into the tower, hiding from the apes, to get medical supplies for Caesar’s treatment. Blue Eyes sees him but does not alert the others and Malcolm takes the young ape to see his wounded father.

As Caesar recovers he finds an old camcorder & grows nostalgic watching video clips from his childhood on his former owner Will Rodman’s. Telling Malcolm of his past he tells his son to go back to the tower to free the humans who have been captured as well as the apes loyal to Caesar and his teaching who were locked up by Koba. Caesar then battles Koba as the other apes watch at the summit of the tower. Malcolm is unable to stop Dreyfuss from blowing up the tower with C-4 and also learns that his men have alerted a military base and they are sending soldiers to the tower’s location. As the C-4 detonates, part of the tower collapses & Caesar overpowers Koba, knocking him to the edge of the tower. Koba reminds Caesar that apes do not kill apes, but Caesar proclaims that Koba is no longer an ape, and lets him fall to his death. As Malcolm informs him of the troops who are headed their way Caesar tells him that the humans will never forgive the apes for the war they started and tells him to leave with his family for safety and the two of them acknowledge their friendship. As Malcolm leaves to find his family, Caesar readies his apes for the coming war with the humans.

Awesome movie and brilliantly shot though the CGI kinda let me down for parts of this movie, especially the beginning where it looked like I was watching a good animated film. But overall I think it is a worthy sequel and I’m happy with the story and the battle scenes. I’ll give it an 8.5 outta 10!