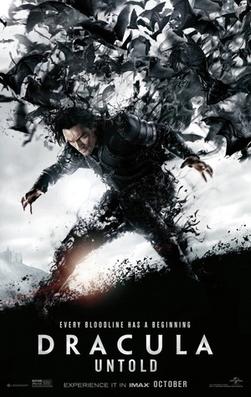 In one of a countless depictions of the legend, Dracula Untold is a 2014 reimagining of the story of Vlad the Impaler and creating an origin story for the Count. A dark fantasy with supernatural elements film it is directed by Gary Shore in his feature film debut and written by Matt Sazama and Burk Sharpless. Luke Evans portrays the title character, and Sarah Gadon, Dominic Cooper, Art Parkinson, and Charles Dance appear in supporting roles.

After being sent by his father to be trained as a soldier for the powerful Turkish Sultan, Prince Vlad has grown to become a feared warrior earning the nickname the Impaler after slaughter thousands. Grown weary of fighting, he returns to take his place as the prince of Transylvania and rules in peace. While in the woods Vlad and his men find a Turkish helmet and fearing an invasion, he sends the rest of his party back home while he proceeds with 2 soldiers towards the trail that leads to a cave on a mountain side. Inside an ancient vampire attacks and kills the two soldiers but Vlad is able to escape at the mouth of the cave as the creature cannot go into daylight. Vlad rushes back to his castle finds out from a local monk that the creature is vampire, once a man who made a pact with a demon in return for special powers.

While celebrating Easter in the castle with his wife Mirena and their son Ingeras and their subjects, a Turkish contingent enters the castle and ask about some dead Turkish soldiers that they found.Vlad offers the regular tribute of silver coins but denies having killed the soldiers. The Turks then demand an additional 1000 young boys to be sent for training, a practise that was stopped for years. Vlad refuses and since his army is small goes to see the current Turkish Sultan, who he knew from their childhood, and asks that the boys not be taken. The Sultan, Mehmed, instead insists that the boys be sent with the soldiers and also includes Ingeras be included just as Vlad himself was. A desperate Vlad goes back to the cave and pleads with the vampire for help. The vampire offers him his blood, which will give him the powers of a vampire for 3 days; if Vlad resists the temptation to drink human blood for those 3 days he will return to normal at the end of it. Vlad agrees and drinks the blood, gaining heiaghtened senses, super strength and the ability to transform into a flock of bats but his skin burns in sunlight.

As the Turkish army attacks at night Vlad is able to single handedly destroy most of their forces and sends his people to a monastry. Enroute Mirena learns of his new found powers but is ok as long as he returns to normal at the end of those 3 days. As they near the monastery, the Transylvanians are ambushed by Turkish soldiers, and while Vlad and his men successfully repel them, Vlad’s sudden increased strength arouses suspicion among his subjects. The next day the monk traps him in a small building and opens the flaps to burn him. Some of the people join in and burn the building but using his powers Vlad is able to send a black cloud to block the sunlight & escapes the fire, and angrily reveals that he became a vampire for the sole purpose of protecting his people from the Turks. That night as a huge army attacks, Vlad transforms in swarm of bats and kills a lot of them but a small decoy kidnaps Ingeras and Mirena is pushed, falling to her death.Vlad is unable to save her and as she lays dying in his arms, she begs him to drink her blood before the sun rises completely, and make him a vampire permanently. He does and as Mirena dies, Vlad is transformed into a vampire. As this happens the old vampire is released from his curse and can now escape the cave.

Vlad then transforms a few of the injured survivors among his people into vampires and they attack the Sultan’s camp, killing off all the soldiers. Mehmed uses bags of silver coins to weaken Vlad but in the end Vlad kills the sultan, drinking his blood and freeing his son and takes the name Dracula, son of the Devil! However the other vampires demand that the boy be killed being the only human in their group. The monk who had previously led the Transylvanians against Vlad appears and keeps the vampires at bay with the Christian Cross. Dracula orders the monk to take Ingeras away, then uses his power to clear the black clouds in the sky, burning all the vampires into dust and he himself becomes a charred corpse. Ingeras is crowned prince of Translvania as the Turkish empire’s threat is no more and Vlad the Impaler is presumed dead. However, Shkelgim, a slave who had earlier approached Vlad to be turned into a vampire, secretly takes Dracula into the shadows and revives him with his blood. As the movie ends, it is now present day (London I think) and Dracuala is walking on the streets when he sees Mina, a young woman who looks a lot like Mirena, and strikes up a conversation with her. The vampire who cursed Vlad watches them from afar, and anticipates what he has planned for Dracula in the future, saying, “Let the games begin.”

It’s an ok movie for Dracula I guess, nothing special or memorable. Focusing on the real prince but adding the origin story for the later legends probably will set it apart. The ending seems to me like they want the movie to be the first of a series about Dracula. Who knows? I’ll give it a 7 outta 10!