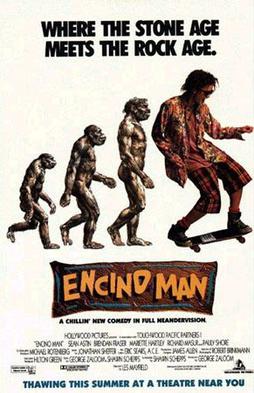 Encino Man (known as California Man in Europe, Asia and New Zealand) is a 1992 American comedy film directed by Les Mayfield in his directorial debut, and starring Brendan Fraser, Sean Astin and Pauly Shore. The plot revolves around two geeky teenagers from Encino, Los Angeles, California, played by Astin and Shore, who discover a caveman in Morgan’s backyard frozen in a block of ice. The caveman, played by Fraser, has to learn to live in the 20th century. Along the way, he teaches them about life. During the first ice age, a caveman attempts to make fire with his girlfriend. An earthquake causes a cave-in that buries the two of them.

This segues into a present day Los Angeles earthquake that awakens average teenager Dave Morgan. He, along with his best friend Stoney, strives to attain popularity in high school but comes off more like a reject and an outcast. Dave is in love with Robyn Sweeney, a sweet and attractive girl who had been his best friend during grade school, and until she reached adolescence, had been rejected by Dave on several occasions. Her boyfriend, Matt Wilson, is a stereotypical jock and school bully, who is constantly responsible for making both Dave and Stoney the objects of ridicule by humiliating them in various ways, usually directly due to Dave’s growing affections toward Robyn. One day, as Dave is digging a pool in his backyard, he comes across a chunk of ice that has the body of a man in it following an earthquake.

They leave the ice block unattended in the garage and space heaters left on cause the ice to melt, releasing the caveman from the opening of the film. The caveman then encounters a garbage truck, which he misinterprets as a mammoth from his time and television which he discovers upon entering Dave’s house. When the boys return home, they find hand paint covering the walls and the house in disarray. Investigating a beeping smoke alarm, they discover the caveman in Dave’s bedroom, attempting to start a fire “Indian-style” by rotating a stick in the center of a pile of kindling. At first, the caveman panics at the sight of them but Stoney quickly calms him by using the flame of a lighter to mesmerize him. After bathing him and trimming him to look like an average teenager, Dave names him “Link” as in the missing link.

They manage to fool Dave’s family into thinking he is actually an Estonian exchange student sent to live with them, and enroll him in school where Link’s bizarre behavior and supreme athletic skills shoot Dave and Stoney to popularity by association, allowing Dave to get closer to Robyn, causing Matt’s anger and frustration. It soon becomes apparent that Stoney’s bizarre attitude is having an effect on Link’s actions and speech, which causes a rift between Dave and Stoney. Matt’s anger and frustration leads to a fight with Link at a skating rink and increases due to Robyn‘s growing attraction towards Link. During a school field trip to a natural history museum, Link gets upset realizing that the cavepeople he knew are all dead. Stoney and Dave console Link that he is not without friends in this time, causing the trio to make a pact. Dave tries to abandon Link, but a fight between Dave and Stoney causes Link to come running back and separate the friends. Stoney and Dave reconcile.

On prom night, Link is a hit at the party with Robyn as his date, while Dave stays in for the evening. Matt breaks into Dave’s bedroom and steals photographic evidence that Link is a caveman. As Dave and Stoney go after Matt and his friends, another earthquake happens. At the prom, Matt’s plan to uncover the “freak” backfires as the information instead makes Link even more popular. Dave and Robyn make up, and the three boys lead the entire prom in an impromptu caveman-like dance. After the prom, the students attend Dave’s house for a pool party where Dave and Robyn kiss. Meanwhile, Stoney and Link follow clues similar to when they found him ranging from breast prints on the slider and paint covering the walls. They follow the muddy footprints to the bathroom and discover a beautiful cavewoman in the bathtub who turns out to be Link’s girlfriend from the beginning of the film. He joins her in the bathtub as Stoney cheers them on and embraces her happily as she is also made to look like a modern human.

Fun and touching in some places. I loved this movie when I first watched it back in 1992 and still think it’s a fun and hilarious. Nostalgically it’s a 10/10 but I would give it an 8 outta 10!