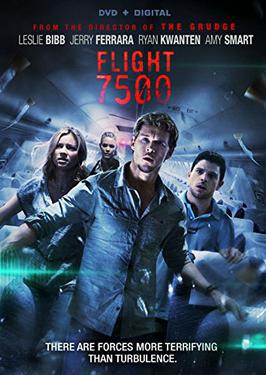 Flight 7500 is a 2014 American supernatural horror film directed by Takashi Shimizu, from a screenplay by Craig Rosenberg. It stars Leslie Bibb, Jerry Ferrara, Ryan Kwanten, Jamie Chung, Christian Serratos, Nicky Whelan and Amy Smart. It revolves around a supernatural force on a plane. The film was released in the United States on April 12, 2016, by CBS Films and Lionsgate.

The movie starts with the various characters getting onto the flight (at no point do they have scenes outside of the plane). Flight 7500 is from Los Angeles to Tokyo and has air hostesses Laura and Suzy welcome the passengers on board, and Suzy questions Laura about her secret relationship with the married captain, Pete. Passengers on board include a group of two vacationing couples, Lyn and Jack and Brad and Pia, who have secretly broken up; a thief named Jake; a suspicious businessman traveling with a strange wooden box, Lance; a young woman named Raquel; newlyweds Rick and the snobby Liz; and the goth Jacinta. After the plane is hit with turbulence, Lance has a panic attack, starts bleeding and coughing up blood and dies.

Captain Pete continues to Japan, after checking with flight control and later moving the first-class passengers into economy and keeping Lance’s body in the closed-off first class. The cabin pressure drops a little later and the oxygen masks are dispensed above the seats, a thick smoke fills the cabin. After the cabin pressure returns to normal and the smoke disappears, Laura finds Raquel unconscious in the toilet and revives her with an oxygen tank. Meanwhile, the plane’s radio has stopped working and Captain Pete cannot contact Tokyo air traffic controllers. As things calm down, Jake sneaks to first-class to steal Lance’s expensive watch but the body moves. Suzy notices that Jake, and Lance’s body, have both disappeared. When Laura notices an F-16 fighter jet flying beside their plane and calls the cockpit to inform Pete, he replies that no fighter jets are present. Brad’s in-flight TV show distorts and shows an image of Lance, while Liz is startled by a reflection of Lance on her laptop screen.

Raquel returns to the washroom to do a pregnancy test and is relieved to find it negative. However, smoke begins to fill the toilet and a hand grabs her and pulls her into the floor. Brad, Pia, Lyn & Jack along with Jacinta investigate Lance’s belongings and find a “death doll,” which Jacinta explains is a shinigami — a being who collects peoples souls after they die, but only if they let go of whatever is holding them to this world. Subsequently, Suzy informs Laura that Lance’s death has made her realize she does not want to marry her fiancé, which in turn leads to Laura breaking up with Pete. Laura searches Lance’s checked luggage, entering the hold through a small hatch. A hand emerges and drags Laura away. As Suzy waits for Laura by the hatch, another hand grabs at her. Suzy runs into first class, while a cloud of smoke follows her. The smoke quickly clears and Brad, Pia, Rick, Liz and Jacinta rush to find out what is wrong.

As Suzy walks towards them, one of the overhead compartments opens and she disappears into it. While the others rush towards the cockpit, Jacinta accepts that her only option is death, and she willingly walks towards an unknown figure which appears before her. The others discover that Captain Pete, Lyn and Jack are dead. The television in the cabin suddenly switches on, showing a breaking news story that Flight 7500 suffered a catastrophic decompression, communication had been lost, and a fighter jet has confirmed the death of everyone on board. Each of the group find their own deceased body, before Brad and Pia accept their death and reconcile. Some time after, Liz awakens to find the plane empty. She hears a strange noise coming from one of the waste bins, a discoloured hand appears and Liz ducks out of frame.

It’s got a nice, familiar cast which is why I checked out this film. It’s pretty tame as far as horror movies are concerned and most of the film is kinda mostly talking. The story though caught my interest though the acting and effects aren’t anything really good. It’s about an average film. I saw Leslie Bibb & Jamie Chung and these are two babes I have a thing for, so why not? 6 outta 10!