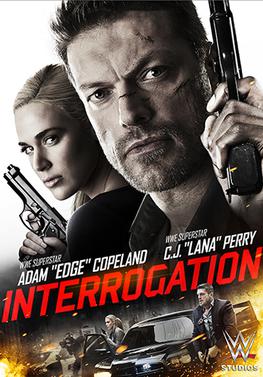 Interrogation is a 2016 American action film directed by Stephen Reynolds from a screenplay by Adam Rodin and Michael Finch. The film, from WWE productions stars former wrestler Adam “Edge” Copeland and C.J. “Lana” Perry, Patrick Sabongui, Julia Benson and Peter McNulty. The film is the 3rd installment in the Action Six Pack series of films. The film was released on direct-to-DVD in the United States on September 20, 2016.

This movie, shot in Vancouver, Canada with almost all Canadian cast would be of particular interest to WWE and wrestling fans due to the WWE connection. An action thriller, starring former wrestling superstar Edge as an FBI agent Lucas Nolan specialized in interrogation. We see him go in to the middle of a shootout where a terrorist is pumping out bullets from a machine gun. He counts down the number of rounds the gun can shoot and the time interval in seconds that the shooter needs to reload and he bursts in and takes him down, alive. After Vasti, a Middle Easter sounding man walks into an FBI building in Minneapolis and admits to a bomb that explodes nearby, he is arrested and held for questioning.

Mark Law brings in his friend Nolan who he has worked with before which doesn’t sit well with agent Sara Ward. Assisting the team is IT specialist Becky. As Nolan questions Vasti, the criminal mastermind riddles him with clues in his rhetoric. While the others think Vasti is just saying cocky speeches about hating the western world, Nolan is able to pinpoint clues to the whereabouts of further bomb sites and drags Vasti along as they get to the first place. The team is able to avoid loss of human life as the bomb explodes and then move on to Vasti’s apartment where they find more clues. There are fights and shooting and all that which comes in a typical action packed thriller. But the twist comes at the end, when Nolan and Vasti are thought to have died while the former is trying to defuse a bomb at the Federal Reserve building.

The other FBI agents are forced to step out of the vault that Vasti & Nolan are in as the terrorist holds Nolan hostage, having stolen the gun from Sara. Nolan steps in the exchange himself with Sara and triggers the alarm by pushing some money off a table. When it becomes 6pm, the power comes back on in the area which will detonate the bomb in the vault, which Vasti meant to damage the American economy. A virus that Vasti planted erases a lot of data in the FBI systems including records of him. At a eulogy for Nolan, while the FBI pays homage to him, we see Vasti & Nolan incognito outside the building! The two were in on the plan together having grown up as friends since they were kids. Vasti has no middle eastern accent and they spent 5 years giving him an alias hard to track. Before the bomb explodes they transfer money out to a secret account and escape through a shaft. As the two friends leave the vicinity of the FBI building, they then go and meet Nolan’s father, an ex-criminal who was arrested and in prison for many years. With fake passports and a private plane waiting for them, the three of them are set to leave for a new life in parts unknown.

Cheap effects but the movie is watchable. Acting isn’t that great but it’s ok for a dull afternoon. If you like wrestling you might be a fan of Edge and hence give this low budget film a watch. 5.5 outta 10!