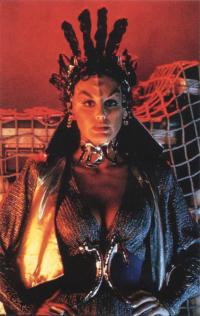 Klingons have been the most featured alien race in the Star Trek franchise, save for the Vulcans. The race of proud & brave space faring warriors were recurring villians in the original series before becoming uneasy allies of the Federation by Star Trek VI : The Undiscovered Country.  Inspired partly by North Asians, especially Mongolians in apperance, the Klingons believe that it is better to die in battle and feel that dishonoured if captured as prisoners, often asking their captures to kill them.

Their apperance has changed quite a bit over the years and this is explained scientifically in the Wikipedia article on Klingons. Some of them looked more human in apperance (with just the high forehead and ridges to distinguish them) and others look more ‘Klingon’, if you will for lack of a better word. Ofcourse there are those like K’Ehleyr (Susie Plakson) or B’Elanna Torres (Roxanne Dawson) who look beautiful and infact are half human (K’Ehleyr has a human mother and Torres has a human father).

But the sexiest Klingon I have seen is the full Klingon, special agent Valkris, as shown here in her very small role in Star Trek III : The Search For Spock. She dies when Captain Kruge destroys the Merchantman vessel after Valkris had obtained Federation data regarding the Genesis project. Valkris, played by actress Cathie Shirriff, is a busty & exotic looking sexy dame of epic proportions and mystery. Definetly the hottest looking Star Trek character.