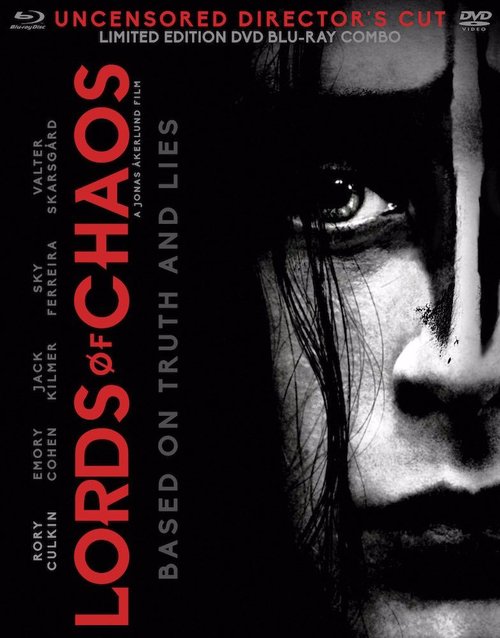 Lords of Chaos is a 2018 true crime horror-thriller film directed by Jonas Åkerlund and written by Dennis Magnusson and Åkerlund. Adapted from the 1998 book of the same name, the film is a semi-fictionalised account of the early 1990s Norwegian black metal scene told from the perspective of Mayhem co-founder Euronymous. It stars Rory Culkin as Euronymous, Emory Cohen as Varg Vikernes, Jack Kilmer as Dead, Valter Skarsgård as Bård Guldvik “Faust” Eithun and Sky Ferreira as Ann-Marit.

In the 1980s, a young guitarist called Euronymous forms a black metal band called Mayhem, the first of the genre in their country of Norway, with Necrobutcher on bass, and Manheim on drums. Manheim leaves and is soon replaced by new drummer Hellhammer and they recruit a new vocalist from Sweden called Dead, who exhibits self-destructive behavior, which he portrays during their live shows by cutting himself and bleeding on the audience, and throwing pig heads at the “posers”. At a show filmed by their friend Metalion, the band meets a fan named Kristian, whom Euronymous initially looks down on.

While home alone, Dead uses his personal knife to cut his arms and throat, and then uses Euronymous’ shotgun to shoot himself in the forehead, leaving behind a suicide note. Euronymous returns home and finds the body but instead of calling the police, he takes photos of the body and moves the knife and shotgun around. After Dead’s body is taken away, Euronymous gives necklaces to the other band members which he claims are pieces of Dead’s skull; this disgusts Necrobutcher, prompting him to leave the band. Soon after, Euronymous starts his own black metal record label and opens a record shop called Helvete (“Hell” ), which becomes a social hub for black-metallers like Metalion, Fenriz of Darkthrone, Faust of Emperor, and Kristian (who is now calling himself Varg Vikernes) of Burzum. They become known as the “Black Circle”. After being mocked by an ego-driven Euronymous, Varg uses his anti-Christian beliefs as motivation to burn down a local church. When challenged by Varg concerning his status as the leader of the Black Circle, Euronymous burns down a church with Faust and Varg accompanying.

Euronymous recruits Varg as bassist, a guitarist called Blackthorn and a Hungarian vocalist, Attila Csihar, to record Mayhem’s first album, De Mysteriis Dom Sathanas. A power dispute between Varg and Euronymous arises. After a wave of church burnings begins, Faust brutally kills a gay man, leading police to link black-metallers to the crimes. Helvete is raided and shut down by the police, and Varg is arrested as prime suspect because of an interview with a Bergen newspaper in which he claimed to have been the one who burned the churches and killed the gay man. He is soon released for lack of evidence. Varg meets with Euronymous and tells him that he is leaving Mayhem and that he is going to start his own record label. Euronymous reveals that the “skull piece” necklaces were fakes, and that he never intended anyone to actually follow through on his angry rhetoric, which infuriates Varg.

In anger, Euronymous rants to a peer about wanting to kill Varg, but later calms down and sends him a contract to release the rights for his music back to him. Varg, having heard that Euronymous was making death threats against him, travels to Oslo in the early morning of August 10 to confront him. Telling Euronymous he wants to sign the contract, he enters his apartment and, after a brief conversation, stabs him. Euronymous pleads for his life, but Varg follows him through the apartment to the stairwell outside and stabs him to death. The next day, the news of Euronymous’ murder spreads throughout Norway and Varg is soon arrested. He is sent to prison for a maximum of 21 years, guilty of both the murder of Euronymous and the burning of several churches. In a voice-over, Euronymous tells the audience not to feel sorry for him, that he enjoyed his life and invented a new sub-genre of metal.

Although it isn’t very true to original events – there is no real Ann-Marit, Dead didn’t kill and hang cats though he did chase them,  the Live in Jessheim scene jumps to Dead’s suicide, given a whole year had passed in between both events and Dead and Euronymous’ subsequent falling out and animosity was never portrayed apart from one scene in which Euronymous mockingly waves a shotgun in front of Dead and suggests he shoots himself andThe time Dead stabbed Euronymous was never portrayed in the film – it is still interesting to see the Norwegian Black Metal scene story, which has fascinated me to no end. I give the film a 7.5 outta 10!