One of my favourite players just hung up his skates for the final time. Martin St. Louis on Thursday announced his retirement from the NHL after 16 season. St. Louis, who turned 40 on June 18, had 21 goals and 54 points in 74 games with the New York Rangers last season. “I have been blessed to play for 16 years in the NHL; it has been an amazing ride,” St. Louis said in a statement released by the Rangers. “I would like to thank the Tampa Bay Lightning and New York Rangers organizations and owners for providing me the opportunity to play the sport I love for so many years. “I could have never played for so long or accomplished all that I have without the unwavering love and support from my wife, Heather, our three sons, Ryan, Lucas, and Mason, and my parents.”

St. Louis had 391 goals and 1,033 points in 1,134 regular-season games. Prior to spending the past season-plus with the Rangers, St. Louis played parts of 13 seasons with the Lightning (2000-2014) and 69 games with the Calgary Flames (1998-2000). The Flames took a chance on the 5-foot-8, 180-pound sniper by signing him to a contract on Feb. 18, 1998. He quickly became an inspiration to undersized and undrafted players looking to one day make an impact in the NHL. St. Louis came to the Rangers in a midseason trade with the Lightning in March 2014. The move made sense since he lives in Connecticut and had always relished the opportunity to play for the Rangers. After finishing the 2014-15 regular season with his lowest point total since 2001-02, St. Louis had a goal and seven points in 19 games in the Stanley Cup Playoffs. 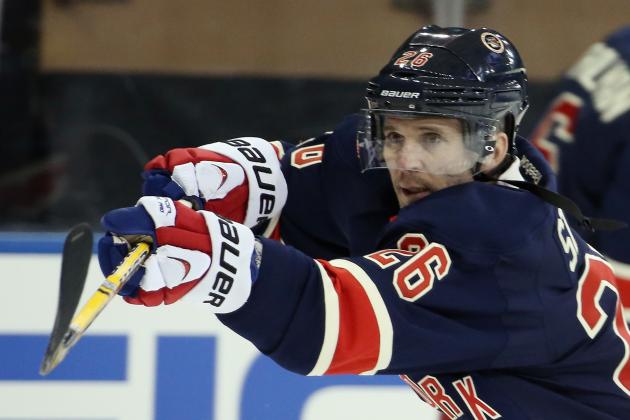 He became an unrestricted free agent July 1. The New York Post reported last month that the Rangers didn’t intend to bring him back for his expected salary-cap charge for 2015-16; St. Louis had just finished a four-year contract with an average cap charge of $5.625 million, according to war-on-ice.com. St. Louis averaged 16:30 of ice time during the playoffs. The Rangers lost to the Lightning in seven games in the 2015 Eastern Conference Final. St. Louis helped the Rangers to the Stanley Cup Final in 2014 and scored his 1,000th NHL point last season. One of the more memorable moments of the 2014 playoffs took place when St. Louis scored in a 3-1 Game 6 victory in the Eastern Conference Second Round against the Pittsburgh Penguins at Madison Square Garden three days day after his mother, France, died of a heart attack at the age of 63. As replays of the goal were shown on the center-ice scoreboard, the MSG crowd began chanting, “Marty! Marty!” The emotional moment occurred on Mother’s Day, and served as a springboard for the Rangers to reach the Stanley Cup.

St. Louis played in seven NHL All-Star Games and was named All NHL First Team once and Second Team four times. He won the Art Ross Trophy as the League’s leading scorer (2003-04 and 2012-13) twice (2004, 2013) and the Lady Byng Memorial Trophy, awarded for sportsmanship and gentlemanly play combined with a high standard of playing ability, on three occasions (2010, 2011, 2013).