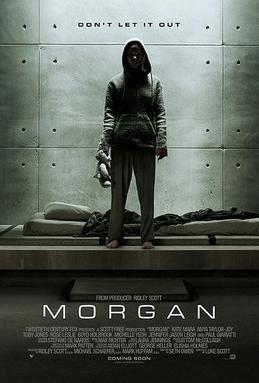 Morgan is an artificial human grown in a secret lab out in a remote secluded area. A small group of scientists have raised her for the past 5 years (she is however around 16-18 in appearance as she has accelerated growth) and she seems to be making good strides until two incidents – one she kills an impaled deer out in the woods seemingly with some compassion but with brutal strength and in a fit of rage after throwing a tantrum she attacks and stabs the eye of one of her handler, Dr. Kathy Grieff. The company that sponsored the scientists work sends out Lee Weathers a risk-assessment specialist. She meets with the scientists Grieff, Dr. Lui Cheng, Dr. Simon Ziegler, Dr. Amy Menser, Dr. Darren Finch & Dr. Brenda Finch. Along with the group is the cook and caretaker Skip Vronsky. Lee meets Morgan and to assess her further she brings a psychologist, Dr. Alan Shapiro to assess her.

After he taunts and goads her Morgans kills Shapiro during the interview and Lee concludes that she must be terminated, given her enhanced intelligence and strength and unpredictable nature. However the scientists who have raised her for 5 years have grown attached to her and cannot bear to kill her so they drug Lee and leave her in the locked lab and try to escape with Morgan. Instead an enraged Morgan kills them and kidnaps her favorite handler, Dr. Amy Menser. In the scientists’ house, Cheng is recording an apology for the failure of the experiment, in which she hints that they were attempting to develop a creation with more human emotions, only to find that the result was harder to control. It is also revealed that Morgan had “weaponized design parameters”. After she has finished, Morgan enters the room and suffocates her. Lee escaped and confronts Morgan but as they struggle they two fall from the top floor to the ground. Morgan leaves with Amy in a car, chased by Lee. Lee crashes into a tree after Morgan pushes her off the road and is picked up by Skip.

Deep in the woods Morgan goes to the lake that Amy had told her about and is moved by the beauty. Lee locates the vehicle they were using and instructs Skip to wait for her by their car, continuing alone. Morgan and Lee have a final showdown, seemingly matched in strength and speed. Finally, Morgan overpowers Lee and impales her on the branch of a fallen tree, seriously injuring her. Morgan leaves her to bleed out, only for Lee to miraculously survive, catch up to Morgan, and drown her in a nearby lake. Lee shoots the surviving handlers, Menser and Vronsky, getting rid of any witnesses to what happened. The final scene shows the businessmen at the company’s headquarters discussing what happened. It’s then revealed that Lee is actually an earlier prototype of the human hybrid, and has been the “perfect” artificial human all this time. Lee is shown making the same gesture with her hands, the same way that Morgan had when Dr. Shapiro asked her how she felt about injuring Dr. Grieff.

Slowly building and plodding along at times, the last 30 minutes is a lot more intense. However the film, despite an excellent cast, fails to ignite any real excitement. It’s a theme done before many times. I give it a 6.5 outta 10!