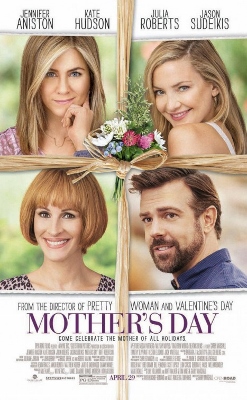 Mother’s Day (2016) is a different one from the horror-esque movie from a few years ago. This one is a 2016 American romantic comedy film directed by Garry Marshall and written by Tom Hines, Lily Hollander, Anya Kochoff-Romano and Matt Walker. The film stars an ensemble cast, led by Jennifer Aniston, Kate Hudson, Julia Roberts and Jason Sudeikis, and featuring Sarah Chalke, Robert Pine, Cameron Esposito, Timothy Olyphant, Britt Robertson, Héctor Elizondo, Jack Whitehall and Jon Lovitz. Considering that his other two ensemble comedy-romance films Valentine’s Day (2010) and New Year’s Eve (2011) – he has a thing for these days!

So the basis of this movie is that everything about estranged families and relationships can get solved on this magical day of all days. A racist mother who hasn’t seen her older daughter in years, because she was dating a “towelhead” (actually an Indian-American doctor) and doesn’t know that the two have married and have a young son and also doesn’t know that her younger daughter is gay and married and adopted the child of her wife, will not suddenly turn over a new leaf and become a very good grandma and accepting of her Indian son-in-law and her gay daughter in law in a day or two – just in time for Mother’s Day! Also a younger woman, who is a mother and lives with her boyfriend / father of her baby and is has commitment issues because she was adopted and believes she was rejected by her birth mom, is egged on by her friends to go meet her birth mom – a famous celebrity who just so happens to be on a book signing tour and in the same city a few days before Mother’s Day!

Not only that but this celeb is shooting commercials for a mood reflecting pendant is peddaling it as a perfect gift for — I will give you one guess! You got it, Mother’s Day! And the number of times they say Mother’s Day is quite a lot. A float / parade for Mother’s Day? Is that a thing? Anyways, there are some laughs in the film and watching Jennifer Anniston & Julia Roberts & Kate Hudson with also Sarah Chalke and a new beauty Shay Mitchell to boot – is a sight for sore eyes! Still the film is corny and cheesy and there is no proper storyline and the writing is terrible. There is a supreme lack of effort and relying on hopelessly dated and predictable scenes and outcomes is just so wrong! There is hardly anything exciting about this movie. And now I will come to the final point, and the only one that pisses me off!

The scene towards the end when the cops ask all the folks in the trailer to come out and when Asif Mandvi’s character comes out, they raise their guns and act like he is a terrorist. He is forced to lie on the ground as they shit scared and racist cops look at his brown skin – one of the cops is black! And despite the protests of the white folks – “he’s my husband”, “he’s my son-in-law” it takes the black lady cop to recognize him and say “it’s ok, he’s my doctor. He fixed my knee” for the other cops to relax! Oh so now it’s ok? What the bloody fuck? Are we expected to accept this bullshit?

I’ll give the movie a 6 outta 10 but for that last bit of nonsense alone I should have given them a 0!