80s glam rock superstars have announced that they are quitting as a band and will retired the name Motley Crue. The heavy metal band plans to say goodbye with 72 concerts in the United States and Canada before retiring. The rockers made the announcement at a news conference Tuesday in Hollywood. The tour, which will feature special opening act Alice Cooper, will have tickets starting at $15 dollars. Formed in 1981 by Sixx and Lee, Mötley Crüe has sold more than 80 million albums worldwide. The group’s last album, “Saints of Los Angeles,” was released in 2008.

“We want to go out with the four founding members of Motley Crue and go out on top,” said lead singer Vince Neil. “We want to leave a legacy,” added guitarist Nikki Sixx. “We want to have some dignity.” The band members have signed a legal agreement promising not to perform as Motley Crue after 2015. A Motley Crue country tribute album is in the works, as is a big-screen version of the band’s 2002 book, “The Dirt.” The influential, and infamous, L.A. rock band turned Beacher’s Madhouse in Hollywood into a circus Tuesday morning as more than 100 media outlets packed the hot spot to hear the band’s announcement of a 72-date farewell tour.They even sat behind tombstone markers for an additional morbid flourish. Unlike countless other rock bands and pop stars who have announced farewell tours to only return to the road for one reason or another — or set up shop in Las Vegas — Mötley Crüe’s members insisted that when this run of shows ends, that’s it. The band even had its attorney on hand to present a formal agreement that, effective at the end of 2015, bars any of the band members from using the Mötley Crüe trademark — which they all signed. Lee smiled and pounded the table with his fist after signing his name on the document, and Mars shouted “R.I.P.” into a microphone. 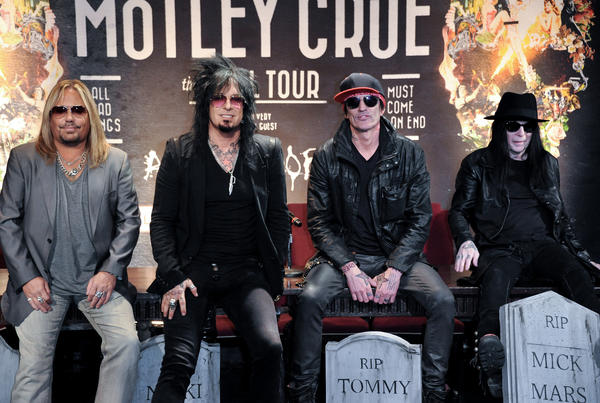