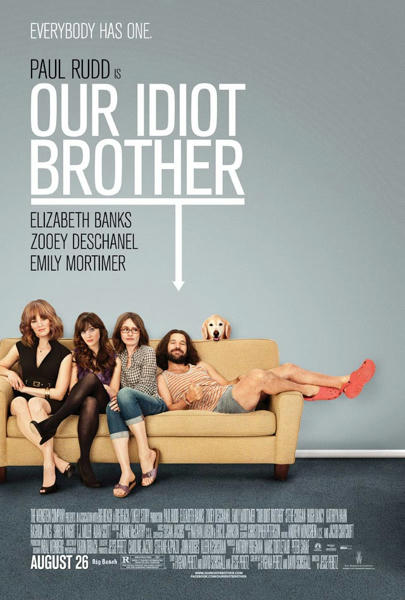 If you like lots of laughs with gross humour – this is not for you. If you like a fast passed comedy – this is not for you. If you like a sweet, charming and slower paced movie with some really good work by Paul Rudd & a solid supporting cast – this is the film for you. Our Idiot Brother is a 2011 comedy-drama film directed by Jesse Peretz and starring Rudd, Elizabeth Banks, Zooey Deschanel, and Emily Mortimer. The script was written by Evgenia Peretz and David Schisgall based on Jesse and Evgenia Peretz’s story, and tells the story of an idealistic man who intrudes and wreaks havoc in each of his three sisters’ lives.

Well Paul Rudd plays Ned who isn’t the sharpest knife in the drawer. He gets into trouble, meaning jail time, for selling weed to a cop (who really goaded him) at the organic market where he sells his wares. When he gets out of jail, he finds that his girlfriend Janet is now living in their farm house with another guy, Billy (T. J. Miller) and refuses to give Ned his golden retriever, named Willie Nelson, back. Ned is distraught over this as he really loves his dog a lot. Without a house to stay he, he moves back in with his mother for a bit.

Ned has three sisters – Miranda (Elizabeth Banks) is a journalist for Vanity Fair and is ambitious. Though she has trouble finding a man to keep her interest, she and a neighbor, Jeremy (Adam Scott) have hidden feelings for each other, but would rather be good friends (Jeremy is even willing to interrupt sex with another girl just to give Miranda a hand with a maintenance problem). Natalie (Zooey Deschanel) is a young, independent, bisexual hipster living with her girlfriend, Cindy (Rashida Jones) and 5 other roommates, suggesting a very communal type apartment. Her love for Cindy conflicts with her fear of commitment, which she hides even around Cindy. Liz (Emily Mortimer), the oldest, is married to Dylan, a documentary filmmaker. Their marriage is failing as Dylan shows no sexual interest in Liz. They also have strict control over their son River, which leaves him unhappy and unable to express himself.

Well Ned stays with each of his sisters for a little while, causing some kind of havoc or the other. His intentions are good but he just doesn’t know how to handle situations – like catching Dylan cheating on Liz, causing Miranda her job, telling intimate stories about Lady Arabella, a reclusive celeb who opened up to Ned charmed by his friendliness, to Miranda and contributing a bit to Natalie having a sexual encounter with her male friend and getting pregnant, cheating on Cindy! However River opens up and comes alive whenever uncle Ned is around and people normally like him. He gets in trouble again when he tries to steal back Willie Nelson from his ex. Finally Ned gets angry and shouts at his sisters when they won’t join in and play charades properly. Ned finally loses his temper and yells at them for their selfishness and for bringing everyone else down. The outburst scares the girls who immediately regret their actions. Ned is arrested and taken to jail when he admits that he smoked weed with a neighbour but refuses to leave his jail cell even when his family pays the bail amount.

His family goes to his ex-house and asks for the dog back. Janet refuses, saying she loves the dog. Miranda yells and says that no one could love anything as unconditionally as Ned loves everything and that he deserves the dog. Despite her refusal, Billy comes out of the house carrying Willie Nelson, tired of Janet refusing to give Ned his dog. They take Willie Nelson to the prison where he is reunited with Ned. A few weeks later things start getting better for the girls; Miranda starts a relationship with Jeremy, Cindy & Natalie start talking again, Liz starts dating and River enrolls in karate classes. Ned decides it is time for him to go back to his life the way he likes it, out of the city and in a quiet area. The girls are sad to see him go, but wish him the best. Later on, Ned and Billy have opened up a small homemade candle shop together and seem to do well enough. One day Ned cannot find Willie Nelson, and begins running through town looking for him. He finds Willie playing with another dog in a park area who has also run away from her owner. The owner comes up and Ned finds he has a lot in common with the woman. When he asks her dog’s name, the owner replies “Dolly Parton” to which Ned says his dog is “Willie Nelson” and smiles.

The movie premiered at the 2011 Sundance Film Festival[4] and was given wide release on 26 August 2011. I suggest you watch this and let the movie charm you. On a meager budget of $5 mil, the movie has only made $24 mil at the box office but it’s something all of you should see. Give it a chance. 8 outta 10!