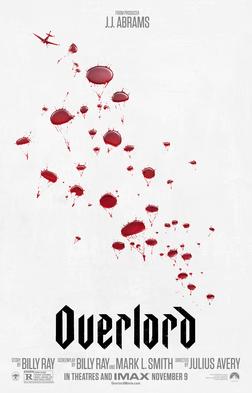 The movie is set on the eve of D-Day as a a paratrooper squad is sent to destroy a German radio tower in an old church. Their plane is shot down and crashes, and most of the squad was killed either in the crash or by German soldiers. Five survivors remained: Corporal Ford and soldiers Boyce, Tibbet, Chase, and Dawson, who is killed by a landmine shortly after regrouping. The remaining four led by Ford run into a young French woman name Chloe who is scavenging the bags of the dead for some loot and she agrees to take them to her village upon knowing that they are American soldiers.

At her home we meet her 8 year old brother Paul and a sick aunt, who is heavily disfigured and secluded in her room. After Tibbet and Chase depart to check the scheduled rendezvous site, a Nazi patrol led by SS Hauptsturmführer Wafner visits Chloe. Wafner sends his men away and proceeds to blackmail Chloe for sex, threatening to send her brother to the church to be “fixed”. Boyce, being an idealistic new recruit, cannot ignore this and interrupts the Nazi officer. Ford is forced to follow suit and restrain Wafner. Attempting to look for Tibbet and Chase, Boyce witnesses the Nazis burning disfigured village residents. He is chased by a dog and is forced to hide in a truck carrying dead bodies inside the church. Sneaking out of the truck, Boyce discovers an underground base which houses not only a radio operating room, but also a laboratory where the German perform various experiments involving a mysterious serum. Boyce takes a syringe containing the serum and rescues Rosenfeld, another member of the paratrooper squad who was captured alive. They escape through the base’s sewers.

When the two reach Chloe’s house ibbet and Chase had already returned. Wafner refuses to explain what the serum does, even as Ford tortures him. As the squad prepares to assault the church, Wafner attempts to escape and fatally shoots Chase. Boyce instinctively injects the serum into Chase who wakes up from being dead only to freak out as he mutates and become very strong. A scuffle ensues ending with Boyce killing Chase. Wafner escapes with Paul as a hostage and alerts a patrol. A shootout erupts where the patrol is killed and half of Wafner’s face is shot off. Back at the lab, Wafner injects himself with multiple syringes which quickly stop the bleeding. Boyce then suggests that they get back to their mission to infiltrate and destroy the tower and the lab. Chloe takes off running to distract a part of the squad that Wafner was previously with to steal a BMW R75 and rig it with explosives. Rosenfeld and Tibbet launch a frontal assault when the bike is ridden in and exploded, distracting them from the actual main purpose of the attack.

Ford, Boyce, and Chloe enter the base using the route Boyce previously used to escape. Boyce and Ford plant the explosives while Chloe looks for Paul. Chloe nearly escapes an encounter with a test subject, sending Paul outside the church and killing the subject with a flamethrower. She then leaves and rejoins Tibbet and Rosenfeld are caught up in a fight, where Tibbet is shot in the shoulder. Chloe arrives just in the nick of time to apply first aid to his wound. Wafner, now possessing superhuman strength and resilience, overpowers Ford and begins torturing him, using the same tactics Ford used. He reveals the serum was made by using the villagers’ bodies to distill an ancient tar from under the village. The aim was to create undying soldiers to serve the Reich. As Boyce distracts Wafner, the injured Ford injects himself with a syringe. He holds off Wafner long enough for Boyce to set off an oxygen tank, which momentarily stuns him.

Ford orders Boyce to leave him behind and detonate the explosives, believing neither side should possess the serum.Boyce complies and narrowly escapes as the church and radio tower collapse behind him, just as the D-Day invasion concludes in a victory for the Allies. In his report, Boyce credits Ford for the decision to plant the bombs inside the church. The commanding officer questions Boyce on talk about an underground lab in the church, Boyce denies everything, remembering Fords remark that no side should have it. The commanding officer seemingly accepts this story and informs the soldiers that they will be reassigned to Charlie Company as the war continues.

I have high praise for the visuals in the opening scene and some of the action scene. It isn’t very original but entertaining enough to keep me interested during the afternoon. I give it a solid 7 outta 10!