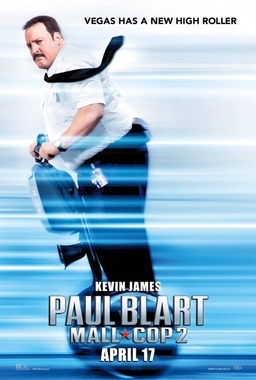 Set 6 years after the end of the first movie, Paul’s marriage to his wife lasts just 6 days before she leaves him. To make matters worse his mother dies when she is hit by a milk truck. Paul continues to takes pride in patrolling his mall, the West Orange Pavilion Mall. In 2015 Paul receives an invitation to a security officers’ convention in Las Vegas and begins to believe his luck is about to change. Maya, his daughter, gets accepted to join UCLA on a scholarship but withholds her news for a while in light of Paul’s invitation. The two go to the Wynn hotel in Las Vegas, the venue of the event, where they meet Divina – the general manager of the hotel – to whom Paul develops and instant attraction. Maya meets the hotel’s valet, Lane and they become become instantly attracted to each other, though Paul does not share their enthusiasm. A fellow security guard Donna thinks Paul might be the keynote speaker but it turns out to be another security guard, Nick Panero.

Meanwhile at the hotel a criminal named Vincent Sofel and his accomplices arrive at the hotel plotting to steal priceless works of art from the hotel and replace them with replicas, then sell the real ones at auction. They disguise themselves as hotel staff and setup base in Sofel’s suite. Maya is upset over her father’s overbearing protectiveness and decides to spend the evening with Lane at a party after declaring that she is going to UCLA despite Paul wanting her to stay closer to home. Paul goes with three other security guards, Saul Gundermutt, Khan Mubi and Gino Chizzeti check out the non-lethal security equipment on display. He also runs into Eduardo who dislikes the fact that Paul seems to be interested in Divina who also seems to be, despite her reservations, falling for Paul. Later Paul ends up having to give the keynote speech as Nick is drunk and passed out. After delivering a stirring and emotionally well received speech, Paul is looking for Maya. Maya and Lane fall into the path of the criminals and are taken hostage.

Following the speech, Paul learns about Maya and Lane’s situation and rushes to help but passes out due to his hypoglycemic condition that has plagued him for years. Once he recovers he uses some of the non-lethal weapons at the convention he takes out much of Sofel’s accomplices and takes the help of Donna, Saul, Khan, and Gino – Paul is able to clumsily dismantle Vincent’s operation and when Sofel aims a gun at Paul, after Eduardo’s brave intervention, Maya uses oatmeal infused sunscreen on Sofel’s face to make him burn due to his allergy. Afterward, Paul convinces Divina that her attraction for him is misplaced, and Eduardo is who she should really be with. Paul also accepts Maya going to UCLA, funding her tuition with the reward money he obtained for stopping Vincent. After dropping off Maya at UCLA, Paul falls in love with a passing Sheriff’s Deputy who reciprocates his advances.

Though it has several detractors and got mostly negative reviews, I found this movie funny and I like Kevin James and his clumsy portrayls of the average Joe with weight issues. I give it a 7.5 outta 10!