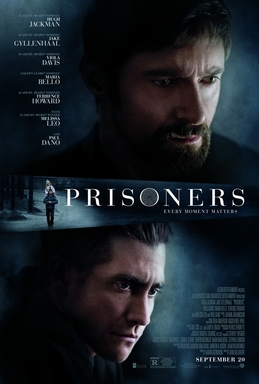 It’s a crime drama with a lot of tension and emotion. Prisoners is a 2013 American thriller film directed by Denis Villeneuve from a screenplay written by Aaron Guzikowski. The film has an ensemble cast including Hugh Jackman, Jake Gyllenhaal, Viola Davis, Maria Bello, Terrence Howard, Melissa Leo and Paul Dano.

In a small town in Pennsylvania, Keller & Grace Drover are attending a Thanksgiving dinner at Franklin & Nancy Birch’s house. The families who are friends and neighbours also include Drover’s older son Ralph and young daughter Anna as well as the Birch’s teenage daughter Zoe and Joy who is Anna’s age. After dinner while the adults sip wine and the teens watch tv downstairs, Anna and Joy sneak away to a parked campervan they had come across before. Sometime later the adults realize that the two young kids are missing and go out in search of them. Ralph mentions the van and they look for it but it is now gone.

The cops are called and detective Loki is assigned to the case. After a search he finds the camper which crashes against a tree when the driver tries to escape. At the police station Loki questions the young man, Alex Jones, who appears to be confused and turns out he has the IQ of a 10 year old. His vehicle is searched by forensics but nothing is found relating to the girls. Loki investigates in houses in the neighbourhood the next day and finds corpse in the basement of Father Patrick Dunn’s house. The priest (Len Cariou) admits that he killed the man because he confessed he was “waging a war against God” and boasted of killing sixteen children. The cops release Alex because of lack of evidence and Drover gets upset as he believes that the young man knows more. He attacks him outside of the police station. Jones whispers to him, “They didn’t cry until I left them.” Since Loki won’t re-arrest him, Dover abducts Jones by himself, locks him up in an abandoned apartment building and begins torturing him until he cooperates with the help of a reluctant Franklin.

The town has a candlelight vigil for the missing girls at which Loki spots a suspicious man in a hoodie and chases him when he takes off. He evades Loki breaks into both families’ houses but leaves without doing anything. Loki, also suspects Dover and follows him to the building where Alex is kept prisoner but doesn’t see anything unusual and Dover tells him that he comes here to drink away from his wife. While he is there, Loki gets a tip from a store that saw the man in the hoodie shopping for children’s clothes and goes to the address using the license plate number and arrests him at his home, whose walls are covered in drawings of mazes. Loki then finds crates filled with maze books, live snakes, and bloodied children’s clothing, including items belonging to the missing girls after Dover confirms it. At the police station, Taylor confesses to the abduction but during a physical altercation with Loki and two other officers, he snatches a gun and kills himself without revealing any more information. The police conclude that Taylor was a fantasist and had no involvement with the disappearances; he stole the clothes from the girls’ homes and bloodied them with pig’s blood to recreate abductions.

Dover continues to torture Alex who then starts denying he is Alex Jones and claims he escaped from a maze. Dover visit’s Alex’s aunt Holly who tells him that Alex became the way he is due an accident involving snakes that her husband raised. She also says that she and her husband were religious until their young son died of cancer. Back at the police station, Loki becomes frustrated with getting nowhere with the case until he matches a maze Taylor drew whilst in custody to the maze necklace worn by the man Patrick Dunn killed in his basement. We then see a drugged Joy, who has escaped from her captors, being found on the streets and brought to the hospital. When Dover asks her where Hanna is, Joy drowsily says that he was there! Dover is suspected of being involved in the crime and he makes of fin the car but he realizes that Joy meant that he was at Alex’s aunt’s house. Loki searches for Dover at the apartment building and discovers Alex. Dover then goes back to the Jones’ house to get information from Holly, but she pulls a gun on him. She explains that, before her husband left her, they abducted many children as part of their “war on God” after their son’s death. Alex was the first child they abducted, followed by Taylor. Holly imprisons Dover in a concealed pit in her yard, where he finds a whistle belonging to his daughter.

Loki goes to the aunt’s house to tell her that Alex has been found when he sees a photograph of Holly’s husband wearing the same maze necklace found on the body in the priest’s basement, making him her missing husband. He sees her drugging Anna and pulls a gun on her but she fires at him as well, injuring him before she is shot dead. Loki then rushes Anna to the hospital where she reunites with her mother. Alex, revealed to be Barry Milland in the newspaper, is reunited with his parents after surviving the torture. A day later, Loki returns to the Jones’ house where the authorities have begun excavating the property. As the other investigators depart for the night, Loki hears Dover’s labored whistling from the pit.

A great performance from the cast especially Leo, Gyllenhall and yes even boorish Hugh (who I usually call Huge Jackass). I never like his acting or him much but this movie has some great acting from everyone. It’s a 7.5 for me though because parts of the film drags out quite a bit.