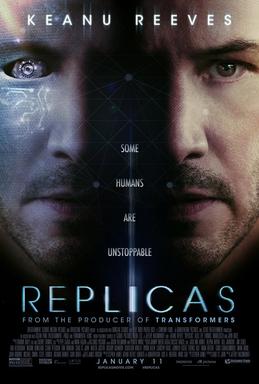 Replicas is a 2018 American science fiction thriller film directed by Jeffrey Nachmanoff, and written by Chad St. John, from a story by Stephen Hamel. The film tells the story of a neuroscientist who violates the law and bioethics to bring his family members back to life after they die in a car accident. It stars Keanu Reeves, Alice Eve, and Thomas Middleditch.

William Foster and Ed Whittle are biomedical research scientists working for Biogeny Corporation in Puerto Rico, attempting to transfer the mind of a dead soldier into an android with superhuman strength, codenamed Subject 345. Foster specializes in synthetic biology and mapping of the mind’s neural pathways, while Whittle’s speciality is reproductive human cloning. Foster successfully captures the soldier’s neural map and transfers it into the android’s synthetic brain, but the experiment fails when the soldier recoils in horror at the android body and destroys it, killing himself again. Foster’s boss Jones warns him that if he cannot get Subject 345 to work, the company’s shareholders will shut the project down.

Bill takes his family – wife Mona and three children Sophie, Matt, and Zoe – on a boating trip but they have a terrible accident in the storm and only Bill survives. Struck with grief he calls Ed and they take the bodies to Bill’s house. As you can guess, he gets Ed to steal some equipment from Biogeny and clones the bodies for Mona, Sophie & Matt and has their neural pathways inserted into the bodies. Unfortunately they only have options for 3 bodies as they only have 3 pods and Bill has to pick 3 from his family members and he chooses to skip the youngest, Zoe. After several days it works and the family lives their lives unaware that they are clones and that their memories of Zoe have been erased from their minds. But Jones finds out and along with some secret service men arrive at Bill’s house. Mona is aware that her child Zoe is not with them and freaks out a bit but the family need to escape.

Sold out by Ed, Bill and his family are caught by Jones and his men and brought to the lab at night. Foster uploads his own mind into Subject 345, who kills the henchmen and mortally wounds Jones. The two Fosters make a deal with Jones: he can live in a cloned body and become rich by working with Foster-345, selling clone transfers to wealthy people looking for a second life. Meanwhile, Foster is able to retire in peace with his family, including the newly cloned Zoe.

The acting is a bit off for this film and the CGI is laughable for 90% of the time. It seems like a movie where every dialed in their performances. Reeves appears to be going through the motions and isn’t very interested until towards the latter half of the movie. The same could be said for the rest of the cast. The movie does seem to be rushed. I give it a 6 outta 10!