Hugh Hefner, who created Playboy magazine and spun it into a media and entertainment-industry giant — all the while, as its very public avatar, squiring attractive young women (and sometimes marrying them) well into his 80s — died on Wednesday at his home, the Playboy Mansion near Beverly Hills, Calif. He was 91. His death was announced by Playboy Enterprises. Hefner was a stunning success from his emergence in the early 1950s. His timing was perfect.

The first issue of Playboy was published in 1953, when Mr. Hefner was 27 years old, a new father married to, by his account, the first woman he had slept with. The first issue of Playboy was financed with $600 of his own money and several thousand more in borrowed funds, including $1,000 from his mother. But his biggest asset was a nude calendar photograph of Marilyn Monroe. He had bought the rights for $500. He had only recently moved out of his parents’ house and left his job at Children’s Activities magazine. Mr. Hefner was reviled, first by guardians of the 1950s social order — J. Edgar Hoover among them — and later by feminists. But Playboy’s circulation reached one million by 1960 and peaked at about seven million in the 1970s. 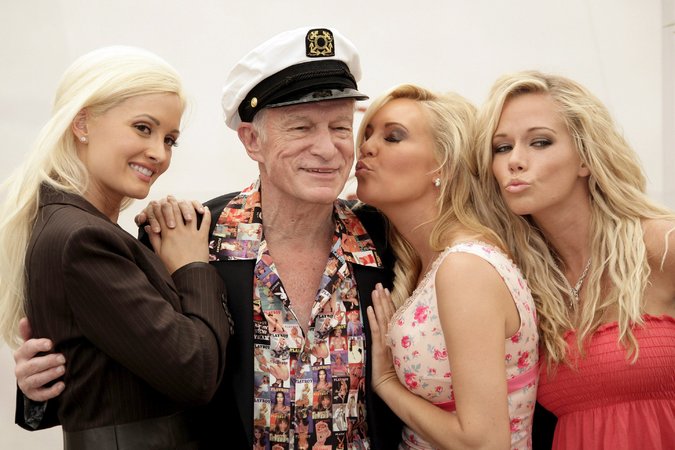 Long after other publishers made the nude “Playmate” centerfold look more sugary than daring, Playboy remained the most successful men’s magazine in the world. Hefner’s company branched into movie, cable and digital production, sold its own line of clothing and jewelry, and opened clubs, resorts and casinos. The brand faded over the years, and by 2015 the magazine’s circulation had dropped to about 800,000 — although among men’s magazines it was outsold by only one, Maxim, which was founded in 1995. Hefner remained editor in chief even after agreeing to the magazine’s startling decision in 2015 to stop publishing nude photographs. Mr. Hefner handed over creative control of Playboy last year to his son Cooper Hefner. He admitted to being “‘involved’ with maybe eleven out of twelve months’ worth of Playmates” during some of these years.

Hefner had a minor stroke in 1985 at the age of 59. After re-evaluating his lifestyle, he made several changes. The wild, all-night parties were toned down significantly and in 1988, daughter Christie began to run the Playboy empire. The following year, he married Playmate of the Year Kimberley Conrad; they were 36 years apart in age. The couple had two sons: Marston Glenn (born 1990) and Cooper Bradford (born 1991). In January 2009, Hefner started dating Crystal Harris, joining the Shannon Twins after his previous “number one girlfriend”, Holly Madison, had ended their seven-year relationship. On December 24, 2010, he became engaged to Harris, to become his third wife. Harris broke off their engagement on June 14, 2011, five days before their planned wedding. The two later reconciled, and on December 31, 2012, Harris and Hefner married at the Playboy Mansion in a small private ceremony; he was 86 and she was 26.

One thought on “RIP Hugh Hefner”