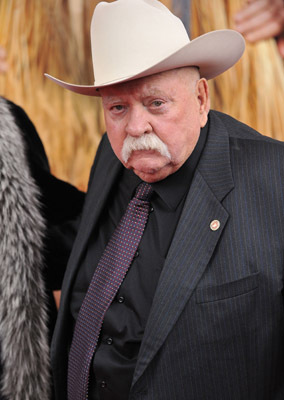 Anthony Wilford Brimley (September 27, 1934 – August 1, 2020) was an American actor and singer. He had been ill with a kidney condition for two months.After serving in the United States Marine Corps and taking on a variety of odd jobs, he became an extra for Western films, and in little more than a decade he had established himself as a character actor in films such as The China Syndrome (1979), The Thing (1982), Tender Mercies (1983) and The Natural (1984). He was the long-time face of television advertisements for the Quaker Oats Company. He also promoted diabetes education and appeared in related commercials for Liberty Medical.

Wilford Brimley was born in Salt Lake City, Utah, on September 27, 1934. His father was a real estate broker. Prior to his career in acting, he dropped out of high school to join the Marines, serving in the Aleutian Islands for three years. He also worked as a bodyguard for businessman Howard Hughes, as well as a ranch hand, wrangler, and blacksmith. He then began shoeing horses for film and television. At the behest of his close friend and fellow actor Robert Duvall, he began acting in the 1960s as a riding extra and stunt man in Westerns.

Brimley’s onscreen breakthrough came when he was cast in the popular 1970s television series The Waltons as Walton’s Mountain resident and blacksmith Horace Brimley; he made seven appearances between 1974 and 1977. His first credited feature film performance was in The China Syndrome (1979) as Ted Spindler, a friend and coworker of plant shift supervisor Jack Godell (portrayed by Jack Lemmon). Later, Brimley made a brief, but pivotal, appearance in Absence of Malice (1981) as the curmudgeonly, outspoken Assistant U.S. Attorney James A. Wells. In the movie The Thing (1982) he played the role of Blair, the biologist of a group of men at an American research station in Antarctica who encounter a dangerous alien that can perfectly imitate other organisms. Brimley’s close friend Robert Duvall (who also appeared in The Natural) was instrumental in securing for him the role of Harry in Tender Mercies (1983).

Brimley then appeared as Pop Fisher, world-weary manager of a slumping baseball team, in The Natural (1984). Shortly thereafter, Brimley secured his first leading role in Ron Howard’s Cocoon (1985), portraying Ben Luckett, leader of a group of geriatrics who encounter a magically reinvigorating swimming pool by their retirement home. Brimley was only 49 when he was cast in the role, and turned 50 during filming; he was at least 20 years younger than any of the actors playing the other retirement home residents. In order to look the part, Brimley bleached his hair and moustache to turn them gray, and had wrinkles and liver spots drawn on his face. He also starred in “Cocoon: The Return“, a 1988 sequel. Through these and other roles, Brimley became widely known for portraying gruff or stodgy old men, most notably on the short-lived 1980s NBC drama series Our House, also starring Deidre Hall, Chad Allen and Shannen Doherty.

One exception was when he played William Devasher, sinister head of security for a Mafia-associated law firm, in the Tom Cruise film The Firm (1993). After portraying the father of Kevin Kline in In & Out (1997), Brimley retreated from Hollywood in favor of involvement in more independent productions. He made an auspicious mainstream comeback with the TNT film Crossfire Trail (2001), co-starring with Tom Selleck (whom he had previously worked with in the 1980s film High Road to China). He played an intimidating United States Postmaster General in a 1997 episode of Seinfeld (The Junk Mail), who forces Kramer to end his boycott of the mail service. After several more years of independent film and TV acting, Brimley had a supporting role in Did You Hear About the Morgans? (2009), making witty exchanges with star Hugh Grant.