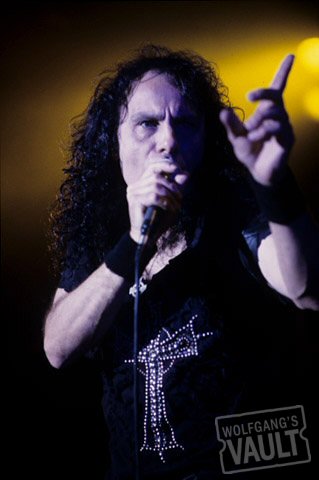 Former Black Sabbath & Rainbow singer Ronnie James Dio has been diagnosed with stomach cancer. The heavy metal rocker was due to begin a tour across Europe with his band Dio last week but he was forced to call off the trek after doctors told him he must begin treatment to combat the disease.

The 67 year old is confident he’ll be able to beat the cancer – and he’s promised fans he’ll make a triumphant stage return once he’s healthy again.

A statement released to Blabbermouth.net from his wife and manager Wendy reads, “Ronnie has been diagnosed with the early stages of stomach cancer. We are starting treatment immediately at the Mayo Clinic. After he kills this dragon, Ronnie will be back on stage, where he belongs, doing what he loves best, performing for his fans. Long live rock and roll, long live Ronnie James Dio. Thanks to all the friends and fans from all over the world that have sent well wishes. This has really helped to keep his spirit up.”

I sure hope he does – at 67 he is just 3 years younger than my dad and he’s still rocking hard! Long live Ronnie!