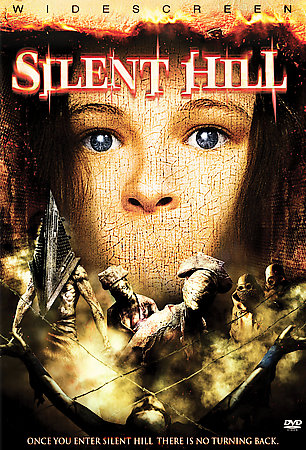 Silent Hill is based on the survival horror series of video games of the same name. Directed by Christophe Gans, the movie came out in 2006 and stars Radha Mitchell, Laurie Holden, Sean Bean, Alice Kriege & Jodelle Ferland who plays the young girl. Deborah Kara Unger & Kim Coates have small roles as well. The film, particularly its emotional, religious and aesthetic content as well as its creature design, includes elements from Silent Hill, Silent Hill 2 and 3.

Rose & Christopher Da Silva have an adopted young daughter Sharon who has recently been experience nightmares and sleep walking. She keeps saying Silent Hill during her dreams. A concerned Rose decides to take Sharon on a road trip to see the deserted ghost town of Silent Hill, without informing her husband. On their way there, she draws the suspicions of motorcycle cop Cybil Bennet who decides to follow them. On her way into town Rose sees a young child in front of her car and swerves to avoid her. She is knocked out unconscious and when she comes to  Sharon is missing, and fog and falling ash blanket the town.

Silent Hill is a ghost town, the victim of out-of-control coal fires that are still burning beneath the streets. Rose runs into town searching for her daughter but finds some weird looking horrific monsters instead. She also meets a woman named Dahlia Gillespie who speaks of terrible things done to her own daughter, Alessa, by the townspeople and claims that Sharon is Alessa. Rose returns to her car and runs into Cybil, who arrests her. While trying to take her out of town, Cybil finds that the road has been destroyed, with a huge hole in front of them and that there is no way to get out of the town. Cybil & Rose team up to find Sharon and also a way out of the town.

They then meet a woman, Anna, who leads them to a church but she is killed by a pyramid headed monsters just outside. In the church, Rose and Cybil discover a cult, headed by a woman named Christabella (Alice Krige). Christabella tells Rose about a demon, who knows where Sharon is. Christabella is persuaded by Rose to take them to the place where the demon is, the town hospital, but as soon as the she finds out the similarity between Sharon & Alessa when she sees a photo, the cult leader declares the two women to be witches and her men attack them. Cybil allows herself to be captured by the townspeople in order for Rose to escape and descend into the hospital basement. There, Rose encounters the burned Alessa in a hospital bed and a being in the form of a girl who strongly resembles Sharon. Rose is then shown the town history and how it was burned.

30 years ago, the town under the leadership of the cult believed in witches and burning them at the stake.  Alessa was stigmatized for having been born out of wedlock by an unknown father; her schoolmates bullied her, while the adults made no effort to protect her. It is also implied that Alessa was molested by the school janitor. The cult trick Dahlia to believing that they are going to cleanse her daughter but instead burn her in a ritualistic fashion but a bigger fire breaks out. When Dahlia returned with the police, Alessa was seriously burned, but alive. While in the hospital, Alessa’s pain and rage caused her “dark” side to manifest in the form of a duplicate of herself, who refers to itself as the darkness inside Alessa. Alessa’s anger engulfed the entire town into a world of dark dreams and monsters, which is what actually happened to the town. Rose learns that Sharon is the manifestation of Alessa’s remaining innocence and goodness. After the flashback, Rose is told that she must aid Alessa in her revenge by granting her entry into the church and that Christabella will soon find the real Sharon and attempt to burn her as well.

When Rose returns to the church, she finds Cybil burned to death with Sharon next on the agenda. She confronts Christabella with the truth and tell the cult members to stop the madness but she is stabbed and when her blood drops on her the floor, it allows the portal to be opened for Alessa to enter. proceeds to kill Christabella and the townspeople, leaving Dahlia, Rose, and Sharon the only survivors. Rose takes Sharon and goes to her car which now starts and drives out on the road which has appeared whole again. However once they reach home they find that they are still in this other dark world that Alessa had created. Christopher is home in a nice clean hose but Rose & Sharon are in the same room only they cannot see him and they see decay and ash falling all over town.

Weird little film with some scares and really good creatures. Yet it fails to fascinate you and the story falters. 7 outta 10!

One thought on “Silent Hill”