Here are five fascinating facts about our neighbours in the solar system – Mars. 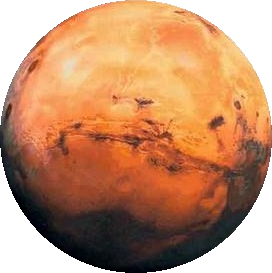 1. Mars Had Water In The Ancient Past: We’ve been debating for centuries about whether Mars had life or not. In fact, the astronomer Percival Lowell misinterpreted observations of “canali” — the Italian word for channels — on the planet as evidence of alien-made canals. It turned out Lowell’s observations were hampered by poor telescope optics of his day, and the canals he saw were optical illusions. That said, several spacecraft have spotted other signs of ancient water — channels grooved in the terrain and rocks that only could have formed in the presence of water, for example.

2. Mars Has Frozen Water Today: We’re very interested in the question of water because it implies habitability; simply put, life as we know it is more likely to exist with water there. In fact, the Curiosity rover’s mandate on Mars right now is to search for habitable environments (in the past or present). Mars has a thin atmosphere that does not allow water to flow or remain in large quantities on the surface, but we know for sure that there is ice at the poles — and possibly frosty locations elsewhere on the planet. The question is if the ice is capable of melting enough water in the summer long enough to support any microbes.

3. Mars Used To Have A Thicker Atmosphere: For water to flow in the past, the Red Planet needs more atmosphere. So something must have changed in the past few billion years. What? It is thought that the Sun’s energy striking the atmosphere must have “stripped” the lighter forms of hydrogen from the top, scattering the molecules into space. Over long periods of time, this would lessen the amount of atmosphere near Mars. This question is being investigated in more detail with NASA’s Mars Atmosphere and Volatile EvolutioN (MAVEN) spacecraft.

4. Mars Has Two Moons – And One Of Them Is Doomed: The planet has two asteroid-like moons called Phobos and Deimos. Because they have compositions that are similar to asteroids found elsewhere in the Solar System, according to NASA, most scientists believe the Red Planet’s gravity snatched the moons long ago and forced them into orbit. But in the life of the Solar System, Phobos has a pretty short lifetime. In about 30 million to 50 million years, Phobos is going to crash into Mars’ surface or rip apart because the tidal force of the planet will prove too much to resist.

5. We Have Pieces Of Mars On Earth: Remember the low gravity on Mars that we talked about? In the past, the planet has been hit by large asteroids — just like Earth. Most of the debris fell back on the planet, but some of it was ejected into space. That sparked an incredible journey where the debris moved around the Solar System and in some cases, landed on Earth. The technical name for these meteorites is called SNC (Shergottites, Nakhlites, Chassignites — types of geologic composition). Gases trapped in some of these meteorites has been practically identical to what NASA’s Viking landers sampled on the Red Planet in the 1970s and 1980s.