With the previous film Species III bombing at the box office and not able to even recover the $35 mil budget, any new films would only get straight to dvd approval. 6 years after the second film, Species III with a smaller cast of mostly then unknowns and a smaller budget (less than half at just $16 mil) was released. The 2004 movie starred Robin Dunne, Sunny Mabrey, Robert Knepper & Amelia Cook and was directed by Brad Turner on a script written by Ben Ripley. Natasha Henstridge, who was contracted to a trilogy commencing with the first Species film, briefly reprises the role of Eve in the opening scene.

The movie starts off immediately at the end of the last film and the medical van that carries Eve’s lifeless body. The driver has lost his way in the middle of the woods and both & his co-driver are stunned to see a half-breed child appear in the back. Suddenly a reviving Eve goes into labor and gives birth to a newborn alien. Eve is killed by the baby using it’s elongated tongue to strangle her. The co-driver is killed by the half-breed and the driver wraps the newborn in a jacket and runs away with it. The military reach the van and burn it. The driver, happens to be Dr. Abbot, who teaches biochemistry at a university and feels it is wrong to kill the alien half-breed. He brings it home and it soon grows into a young girl in a few months, who he names Sara. Later the half-breed that killed Eve, also aged comes to see Dr. Abbot in his office but dies on the chair by decaying. The shocked Doctor asks Dean, a student whose funding is in jeopardy, to assist him in his research to create a perfect alien DNA, promising him funding and future awards. At home Abbott see Sara emerge as a beautiful young woman. A fellow professor Dr. Turner sees her by change and she strips and tries to seduce him but rejects him on sensing that he is not a half-breed. Dr. Turner tries to force himself on her only for her to revert to her alien self and kill him. Sara then goes to campus and finds a half breed but rejects him as he is carrying a disease.

The rejected half-breed tries to attack Sara at her home but is intervened by Abbot who he kills before dying himself. Dean left with taking care of Sara is almost seduced by her but he is frightened by her alien form. Meanwhile Dean’s roommate Hastings has contacted a sexy woman looking to date biochemists online and he, pretending to be Dean, sends her some on Dean’s notes. The woman, Amelia, is actually a half-breed and kidnaps him to get to Sara. At Abbot’s house, Amelia and Sara pressure Hastings into creating the perfect species so that both can have mates. Dean is also contacted by govt agent Wasach who was alerted by the notes in Amelia’s website and the two interrupt creating the proceedings at Abbot’s house and then take Sara’s harvested eggs. Dean, Hastings & the agent flee to a nearby experimental power plant, followed by Amelia and Sara. Dean attempts to trap Sara and Amelia in the plant’s core. When Sara’s eggs fall into the core, Amelia attempts to kill Dean but is stopped by Sara, who throws Amelia into the core. Dean manages to close the shaft to the core just in time to prevent a nuclear disaster, but not before Sara also falls down the shaft. Later, when Hastings drops by Abbot’s house he finds Sara alive. Dean explains that he pulled her to safety and created the perfect mate for her, using the salvageable parts of the half-breed DNA so that Sara wouldn’t be alone. Dean asks Sara why she saved him, since with her eggs gone there was no reason to, Sara doesn’t answer, but its indicated that she’s grown to care for Dean. After Sara and her mate have departed, Dean reveals to Hastings that he ensured the mate would be sterile, thereby preventing any offspring. 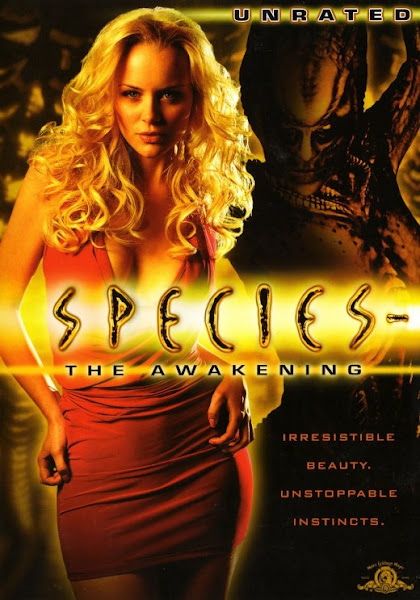 Species 4 is not called that but Species The Awakening. It’s a Scifi original movie that decides to try and cash in on the Species franchise but is really a standalone movie and the worst of the bunch. Directed by Nick Lyon and the film stars Helena Mattsson, Adam Wylie, Ben Cross,  Marco Bacuzzi, Marlene Favela, and Dominic Keating (Star Trek Enterprise). The film makes no mention of the project Athena. Instead we have young & hot professor Miranda Hollander who lives with her uncle & museum curator Professor Tom Hollander and believes she has lived with her uncle from early age after her parents died in an accident. After her birthday Miranda becomes unconscious and is sent to a local hospital and before Tom can arrive she changes into an alien (similar to the ones in the sequels) and kills a bunch of people there before falling unconscious. Tom injects her with human hormones and drives with her to Mexico.

When she comes to Tom tells her the truth – she is the result of of an experiment that combined human and alien DNA, an experiment conducted with his friend Forbes McGuire (from where they got the alien DNA, who knows). Miranda grew very quickly and her childhood memories were forged by Tom. Tom explains he and Forbes parted ways because of differences of opinion over the vision of their creation but now he feels that Forbes is the only one who can help her. In Mexico Tom, who is looking for Forbes, is attacked by a hybrid alien, dressed as a nun in a market and is nearly killed. Tom is also almost killed by a taxi driver set up by an over exaggerating Texan cowboy – why we can only guess. Finally he finds Forbes in a remote section of a town, living with his latest experiment, a hybrid named Azura, who is also his lover. Tom recognizes Azura as the nun who almost killed him. Forbes supports his experiment by creating half-alien facsimiles of dead pets and relatives. Forbes checks Miranda’s condition and finds that Miranda has reached the end of her lifespan and will die in days. The only way to deny death is injecting fresh human DNA into Miranda. Miranda won’t allow that to happen when she realizes it will result in the sacrifice of another human being.

With Azura’s help Tom abducts a singer from a seedy bar and they succeed in extending Miranda’s life. However now Miranda awakens as a much more sinister & raunchier version of her self. She goes out to seduce and kill men. Tom chases Miranda. He is found by Azura in a church and fights with her, when Azura transforms into an alien. Forbes chases Miranda, but she seduces him before he can give her another injection and eventually they have sex. He is then killed by her. The climax is in Forbes’ house, when Miranda is examined by Tom, afraid she’s pregnant. Tom is attacked again by Azura, but Miranda, in alien form and attack Azura; they succeed in killing her. However, Miranda is wounded, and after she goes back to human form, she dies. In the final scene Tom turns on all the gas burners and tanks in the house and leaves. The house explodes.

While Species 3 made some sense – I dunno how Dr Abbott finds out about the experiment – The Awakening makes no sense what so ever and should have been avoided. Not that Species 3 is a well made movie. All you get a few hot women with no clothes. Hmmm! I’ll give Species 3 a 5 outta 10 and The Awakening a 3 outta 10!