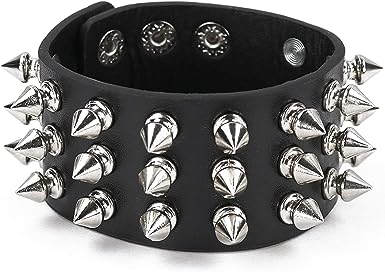 You see this ridiculous thing on the left side? The spike bracelet or whatever it’s called? Bracelet of spikes. You can buy them on Amazon or Etsy. I think this was the rage during the 80s as I saw many metal bands who have members wearing them and a bunch of fans as well.

A studded bracelet, alternatively called a spiked bracelet, is a wristband usually made with black leather and which has metallic spikes. It attaches to the arm with one or more straps, or more rarely with simple buttons. It is a usual fashion accessory worn by punk, gothic and fans of heavy metal.

So I had one as well, at the tender age of 9 or 10 if I remember correctly. But it wasn’t because of a rock or metal band that I wanted one. Oh no! It was because there was this movie called Fast Foward, which came out in 1985, and was a big hit among my friends and I. They were dancers and had a lot of breakdancers in it (remember break-dancing in the 80s?) and I was hooked onto this film. I watched it all the time and I saw some of them wearing one of these so I asked my parents to buy me one. Silly boy!