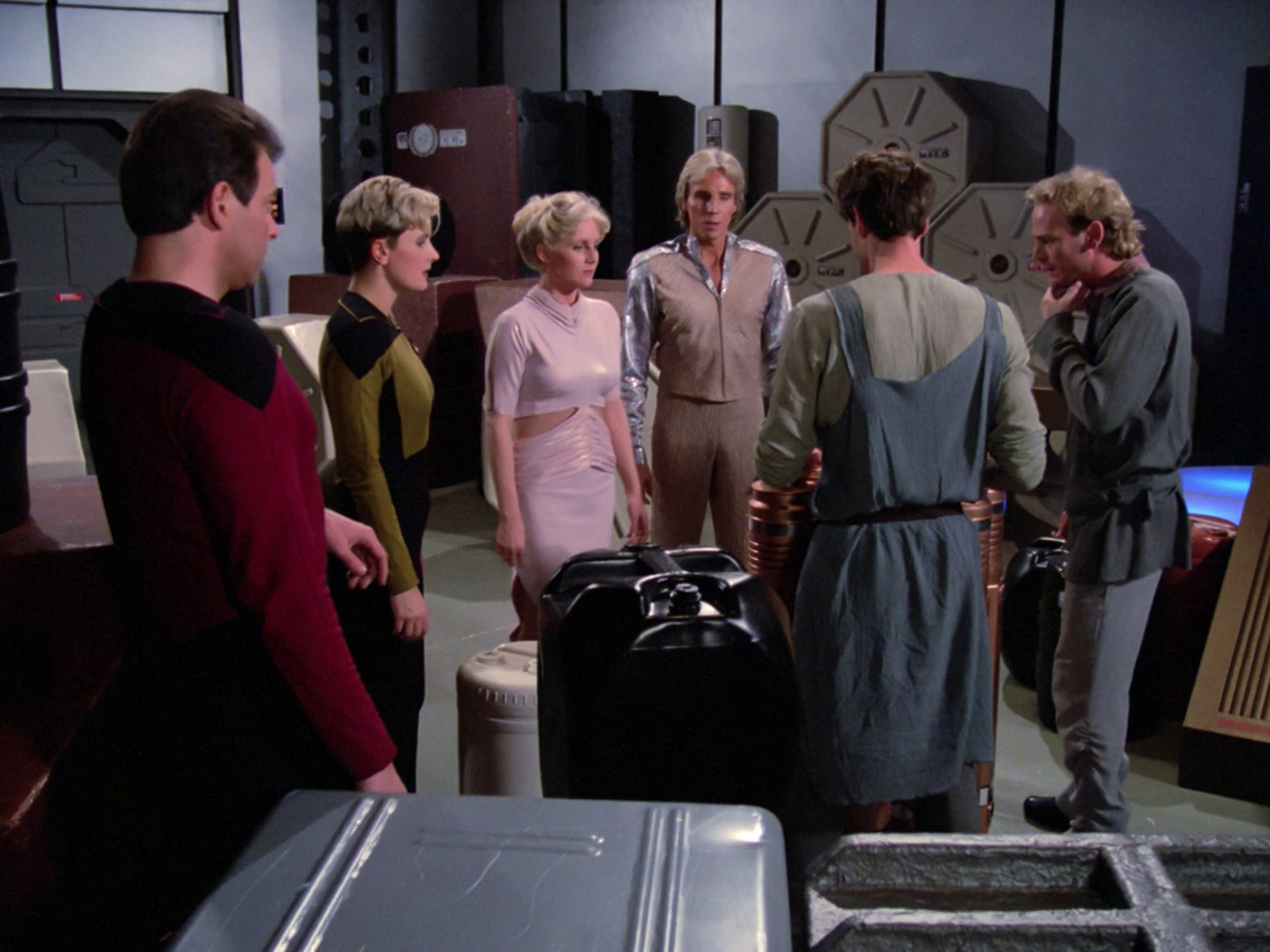 Symbiosis is a really good example of the Prime Directive and non-interference despite wanting to do something. The USS Enterprise D receives a distress signal from a freighter and offering their assistance, captain Picard has the freighter crew beamed up but he and his officers are surprised to see that the cargo was beamed up first instead. Four of the 6 occupants of the freighter are beamed up just in time before their ship explodes. While our crew is stunned – had they beamed themselves aboard first all 6 occupants would have survived – the guests argue amongst themselves as to who is the rightful owner of the cargo. There are two members each of Brekkians & Ornarans – different races on neighbouring planets. The cargo is ‘felicium’ a medicine which the Ornarans need to cure a plague which has affected everyone on their planet. However the materials needed for the medicine is available only on the Brekkians’ home world and thus the Ornarans are dependent on their neighbours for the medicine. In turn the Brekkians devote themselves to making the drug and their whole society is dependent on it; all their needs are met by the Ornarans in return for regular supply of the drug.

The Brekkians & Ornarans on board the Enterprise fight for possession of the felicium; the Ornarans claim that they have paid for the cargo, therefore it belongs to them. The Brekkians argue that since the payment was lost on the destroyed freighter, the cargo still belongs to them. Dr. Beverley Crusher cannot find signs of the infection on the Ornarans but since they are clearly suffering Picard asks the Brekkians to provide atleast two doses for the immediate requirement of the two Ornarans onboard. Seeing their reaction to the felicium being injected into them, Dr. Crusher correctly concludes that the drug is actually a narcotic and the two Ornarans, like their entire species, are addicted to it! Data and Riker research the history of the drug. Though it had cured a plague on Ornara two hundred years before, it is now just being sold as an addictive narcotic. The Brekkians won’t give the rest of the felicium to the the Ornarans without pay but change their minds after a signal from Ornara demanding that the felicium be sent to the planet immediately. The two Brekkians decide to “give” the drug to the Onarans, rather than risk the Onarans losing their addiction. Picard realizes that they have been purposely exploiting the Ornarans. Picard cannot tell the Ornarans without violating the Prime Directive.

To correct the situation, while letting the Onarans have the shipment of felicium the Brekkians had already promised to give, Picard refuses to repair the Ornarans’ freighters, citing the Prime Directive of non-interference for both decisions. Without a method of transport, the Ornarans will begin to withdraw from the drug. This is the only thing he can do without violating the rules of the Prime Directive; the Federation & humans have found that whenever mankind interferes with a less developed civilization, no matter how well intentioned that interference may be, the results are invariably disastrous. So no matter how he feels, it was the only thing he could do.

That was just awesome.