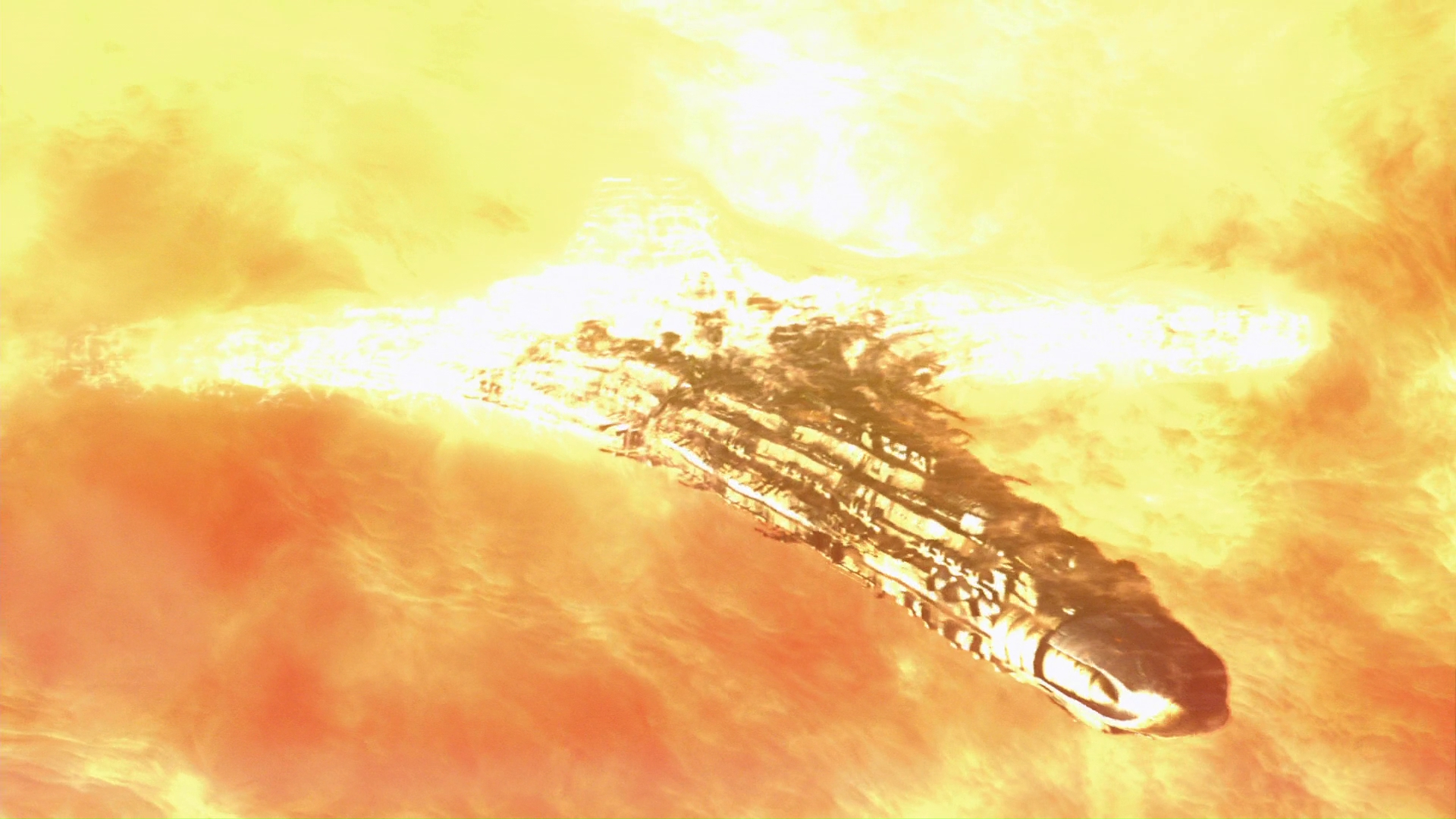 This episode is just awesome. A meeting is held to discuss the fact that a lot of systems have significant damages and they don’t have spare parts. Life support is also at a reduced capacity as Dale Volker & Adam Brody explains. Telford asks for alternatives while Dr. Rush says that they have no option but to carry on. He also objects when Eli tells the rest about something he & Ginn were working on – to devise a means to dial Earth while Destiny is recharging inside a star. Rush vehemently opposes this plan, as Eli’s plan fails to consider the conditions inside the star while dialing. He is also concerned that it could destroy the ship.

Everyone else is on board with going home as they simply cannot continue on a ship in the condition that Destiny is in. Rush reiterates that Eli’s plan does not and cannot account for the unpredictable nature of conditions within a star, and establishing a connection could rip a hole in the fabric of space-time. Young agrees to stay back with Rush & asks for 10 other volunteers to continue on with the mission on Destiny while the rest of the crew dial & gate back to earth, if the plan works. Before they can go on, a shuttle approaches the ship and radios them – Dr. Rush is in the shuttle! This stuns Telford, Young and co as Rush is standing with them! The second Rush docks the shuttle as Scott, Greer, Telford, Young, and the first Rush arrive. Upon exiting the shuttle, Rush tries to attack Telford, blaming him for killing the crew. He then collapses. Young calls TJ to treat his injuries. Wray joins her.

The other Rush, who we will call future Rush, is from 12 minutes in the future. He tells them what happens in his timeline – they dial the gate and Telford leads the group through the gate, asking them to follow him in a few seconds. However an overload happens and with the exception of Telford, none of the crew makes it through to earth. They either died or exited at some other gate in any of the galaxies! Future Rush stayed behind to stabilize the wormhole and once everyone was through the gate the ship started to have overload and he got away in the shuttle. Rush looks at Future Rush and quips that he now has someone to have a decent conversation with. The plan for them to gate to Earth is dropped. However the crew can get something out of this failed attempt. Destiny needs spare parts and they have a twin Destiny, one just minutes away from the future, lying in space. So the plan is for the crew to split into groups and salvage anything that they can from the Future Destiny including spare parts and food.

The other destiny comes into view and they gate across. The teams rush off in different directions and start salvaging everything that they can – spare parts, food, weapons, plants, medicine, and anything else useful is taken. They have 40 minutes to do this and gate back. On his way back to the gate, Future Rush tries to salvage a power relay for the weapons array as Telford approaches him. Telford insinuates that Rush tried to sabotage the dialing attempt and made a mistake which killed the crew, which Future Rush adamantly denies. When Telford pokes Future Rush in the chest, continuing his accusations, Rush angrily shoves him off and blames Telford for their deaths. He realizes too late that he has just pushed Telford into the damaged relay. Telford is electrocuted to death, to Future Rush’s horror. He flees the scene.

Scott & Rush come to retrieve the two of them as the times is ticking away and are shocked to see Telford lying dead on the floor. Rush runs to get to his future self and finds his double at the interface chair. The Future Rush tells him Telford’s death was an accident, and insists that the story he told about his experiences was true. Knowing he can’t go back to Destiny without them believing he purposefully murdered Telford, he intends to sit in the chair. The first Rush helps him, then abandons ship with Scott. The second Destiny is consumed by the star. Meanwhile Wray uses the stones to report to Stargate command and informs Future Telford why he was the only one to gate back to earth. Destiny continues on with spare parts & food that let’s them continue the mission but most of them sad that they could not gate back home.