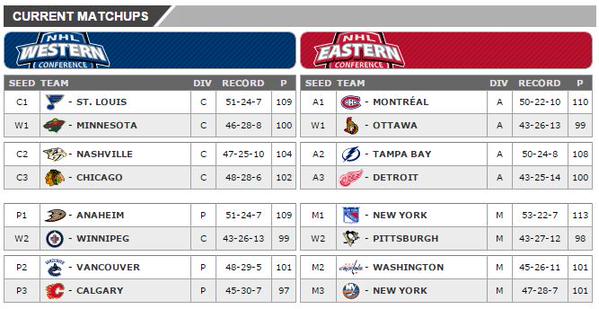 Or rather it starts on the 15th of April with the 16 teams who have qualified looking for the ultimate glory on ice. Thi season 5 Canadian teams have made it to the playoffs, finally having enough teams to account for the game usually dominated in numbers by Canadian players. Calgary, Winnipeg, Vancouver, Montreal and Ottawa qualified for the playoffs while Edmonton & Toronto sit on the sidelines.

As usual I will be supporting my team the Ottawa Senators and if they get beaten and the Jets are still in it I will be screaming for Winnipeg. Canadian teams all the way. I haven’t watched any live games since 2013 and haven’t even followed the league games this season at all but I will be keeping an eye on the playoffs. GO SENS GO!