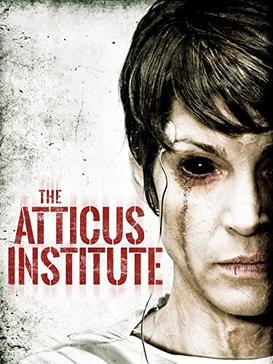 The Atticus Institute is a 2015 American independent pseudo-documentary horror film written and directed by Chris Sparling about a paranormal research institute, which becomes home to the only U.S. government confirmed case of possession.The story of the film is presented in documentary format, with footage of the events punctuated by interviews with people related to them. In the early 1970s, Dr. Henry West (William Mapother) founded the Atticus Institute in rural Pennsylvania, hoping to find evidence that proves supernatural abilities such as ESP are real. Despite the best work of West and his aides, however, every subject that comes to the institute seeming to display such abilities are ultimately proven to be frauds. The team is demoralized in their work by the time Judith Winstead (Rya Kihlstedt) is brought to the institute by her sister Margaret, who is troubled by her disturbing behavior.

Judith immediately proves to be a different case than the previous subjects, passing all the tests with incredible proficiency and leaving no doubt that her abilities are genuine. Her behavior remains erratic, however, and many of West’s staff become uncomfortable with her, even while their boss’s fascination with her increases. With the usual tests proving to be no challenge for Judith’s incredible power, the team gradually introduces new tests that show her to possess even greater abilities than first imagined. Judith’s behavior grows more unstable as her abilities evolve, disturbing West’s staff. Bizarre events begin to happen to the aides and their families outside of the institute, which they suspect Judith is somehow influencing, and many of them resign from their positions to escape from her.

As the situation escalates, the team seeks help from the United States military; under the influence of military advisors, they conduct new tests that lead to Judith manifesting new abilities such as telekinesis and pyrokinesis. One day, Judith experiences a violent reaction to a spectral photography experiment, and when the images are checked, a cloud-like entity is observed temporarily leaving Judith’s body during her convulsions. This leads the team to realize that Judith’s powers are the result of demonic possession. With this discovery, the military seizes full control of the institute under a pretext of national security, deciding that Judith’s abilities can be utilized as a weapon against the Soviet Union in the Cold War, and they begin conducting increasingly inhumane experiments on Judith against West’s objections. Using methods such as electroshock therapy, the military try to tame the demon and force it to cooperate in exercises such as identifying the location of enemy bases, ignoring the effects these tests have on Judith.

As these experiments ultimately prove fruitless, the military decides to try removing the demon from Judith by having a priest perform an exorcism while a soldier is connected to Judith via machinery. The process shows promise at first, but Judith suddenly lashes out and gravely injures the priest, disconnecting the electrodes attached to her before passing out. As the staff try to reattach the electrodes, Judith experiences a violent seizure while the demon attacks West through the body of the soldier connected to her. An unseen force blasts through the facility, killing all present. As the cameras come back online, Judith is now free of the demon’s control and restored to her true self, but still tied to a chair in an observation cell. She panics when she sees the carnage around her. The demon enters the room in West’s body, having fully consumed his soul, and stands before Judith’s cell as she pleads for help. West kills Judith by telekinetically bursting her heart, then calmly exits the room and disappears.

The film concludes with a note revealing that Judith’s body was buried in an undisclosed location following an autopsy, and her case remains the only instance of possession officially recognized by the United States government. Dr. Henry West, after disappearing on October 23, 1976, was declared legally dead in 1982 and his whereabouts have been unknown for over forty years.

It started out kinda interesting and I was a bit excited seeing the cast with John Rubinstein, Harry Groener  & William Mapother in it but as the movie progresses I got bored until the last 20 minutes or so. I even fell asleep. I give the movie a 6.5 outta 10!